Trainer Aidan O’Brien cleared to have his first runners of the season in the Coronation Cup, 2,000 Guineas and 1,000 Guineas

Trainer Aidan O’Brien has been cleared to have his first runners of the season in Britain after it was announced that overseas runners will be allowed to run in the Coronation Cup, 2,000 Guineas and 1,000 Guineas.

In rules that apply to trainers in Ireland and France, the first three group one races of the British season – run at Newmarket on June 5, 6 and 7th respectively – precede the resumption of Irish racing which was confirmed on Friday as June 8.

The three British races are the only ones accessible to overseas runners in the first two weeks that racing returns on June 1. Royal Ascot starts on June 16.

Concern had been raised in the training community that a situation of already oversubscribed races would be made worse if there was no bar on overseas runners.

A statement from the Resumption of Racing Group said: ‘It is agreed that protecting ourselves against unnecessary risk in the opening few weeks is a responsible and proportionate approach.

‘As a result, foreign-trained runners will only be permitted to run in the three Group One races taking place in Britain during the first fortnight (Coronation Cup, 2000 Guineas and 1000 Guineas), in order to help facilitate a safe and smooth resumption.

‘International runners will not be permitted to take part in Group 2, 3 or Listed races during this period, but will be able to participate in all Pattern and Listed races taking place in Britain from 15 June 2020 onwards.

‘Furthermore, no internationally-trained horses will be permitted to take part in any races of Class 2 and below until further notice. 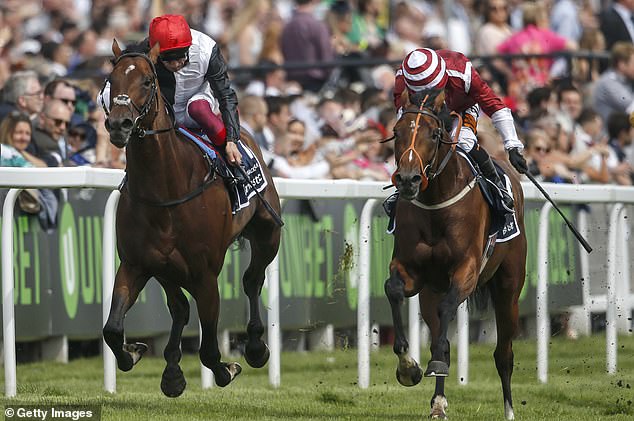 ‘This step has been taken to help address concerns that with a reduced fixture list in place, the number of eliminations is likely to be a significant issue when racing resumes. This position will be kept under review and revisited as soon as circumstances allow.’

The Resumption of Racing group also announced race plans and measures in the opening days of the season re-start to allow as many two-years-old as possible to run in advance of possibly competing in the two-year-old races at Royal Ascot.

It is also anticipated that these two-year-old races will be oversubscribed with much less evidence than usual to eliminate entries on the evidence of form shown on the track compared to normal seasons when two-year-old races have been staged since March.

The Resumption of Racing Group said: ‘Trainers will be asked to identify specific horses that they would like to see given priority against elimination from any division of the currently programmed two-year-old races.

‘The number of horses that can be selected by any trainer will be based on their previous record with two-year-olds in Open Maiden or Novice races as well as the number of runners that they have had in Royal Ascot two-year-old races in the last three years.’

Meanwhile, Irish racing will view the June 8 re-start as a partial success having looked to be in danger of having to wait until June 29 under its Government’s phased re-start plan.

There will be stricter biosecurity measures in place than when Ireland staged 10 fixtures behind closed door before being shut down on March 24.

Brian Kavanagh, chief executive of Horse Racing Ireland, said: ‘The decision to allow racing to resume behind closed doors will be welcomed within the industry. For Flat racing in-particular, but also for a significant portion of the National Hunt population, there is a seasonal and cyclical nature to the industry and these are key months in the trade and export of horses with proven form on the race track, as well as a vital period in the sales season.

“These will not be race meetings as you might traditionally imagine them, rather stripped back events which will determine the best horses in various categories, a vital factor for the breeding industry. Attendance will be kept to an absolute minimum and Covid-19 protocols will be strictly enforced.”