Out of his sextet of runners, Aidan O’Brien is sweet on Mogul for Investec Derby glory despite recent defeats

Mogul is the shortest-priced of the sextet of Aidan O’Brien-trained runners in Friday’s Investec Derby after Ryan Moore opted to ride the colt at Epsom. Coral cut the son of Galileo to 11-2 third favourite.

Moore’s decision-making this season has been made more difficult because travel restrictions mean he has been unable to go to Ireland to get accustomed to O’Brien’s candidates.

Mogul — long-touted as the colt at the top of O’Brien’s Derby pecking order — has been beaten in his last two runs, most recently by Pyledriver, who defeated him by four-and-three-quarter lengths in the King Edward VII Stakes at Royal Ascot.

Aidan O’Brien believes Mogul has what it takes for the Derby, despite recent defeats

That led to O’Brien’s Russian Emperor, winner of the Hampton Court Stakes, becoming the shortest-priced of O’Brien’s Derby candidates at 6-1.

But the trainer, seeking a record-breaking eighth Derby win, says Mogul’s defeats had not dented his confidence in the colt.

‘We think he has improved a lot since Ascot and still think he will improve more, but he does have plenty of ground to make up,’ he admitted.

‘We took a chance at Royal Ascot. We knew we were only going to get one race into him before the Derby when he would normally have two. We felt to give him a chance to win the Derby he had to have the toughest trial.

‘He needed it. He carries plenty on condition. He is tighter than he was. He is a good, strong traveller. We don’t think he is short of pace and always thought he would get the trip.’ 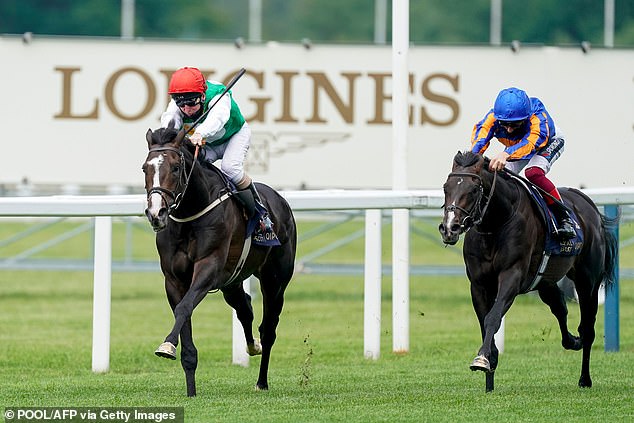 O’Brien has booked William Buick for Amhran Na Bhfiann and James Doyle for Mythical, but for the first time this season he will bring his Irish-based jockeys to Britain.

Sixteen runners have been declared for the Derby. Coral make Frankie Dettori-ridden English King the 11-4 favourite ahead of the Andrew Balding-trained 2,000 Guineas winner Kameko (4-1).

With Moore on O’Brien-trained favourite Love in the Oaks, Heffernan rides stablemate Ennistymon and Beggy is on Passion.