Love, seen as the biggest threat to Enable in Sunday’s Qatar Prix de L’Arc de Triomphe, will not run because of the increasingly testing ground at Longchamp.

Trainer Aidan O’Brien said that the three-year-old filly who has easily won the 1,000 Guineas, Oaks and Yorkshire Oaks this Summer would now be aimed at the Breeders’ Cup Turf at Keeneland in America in November.

Rain all week in Paris and no prospect of that coming to an end before the race had seen Love’s odds drifting. O’Brien had previously pointed out his concerns over her ability to cope with soft ground.

Bookmakers reacted by further tightening the odds of Enable who is bidding to become the first three-time winner of the Arc.

Ladbrokes spokesman Jon Lees said: ‘Love had been drifting like a bateau mouche on the River Seine so her withdrawal had begun to look inevitable. 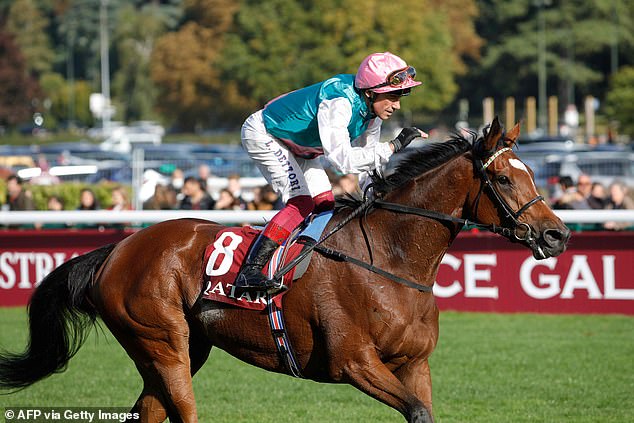 ‘While it’s a real shame that we won’t now get to see her face off against Enable, it means Enable has a much better chance of securing an historic third Arc win.’

Had O’Brien declared Love at this morning’s final forfeit stage, a withdrawal on the day would have incurred a fine and also meant his No 1 jockey Ryan Moore could not switch to another of his runners.