When Shaun Murphy was dumped out of snooker’s UK Championship in November by Chinese amateur Si Jiahui he sourly complained that it was ‘not fair’ that someone from the unpaid ranks should be competing against someone doing it for a living.

But there was something that reinforced your belief in sport and what it can do for the human spirit when amateur jockey Sam Waley-Cohen won Saturday’s Grand National on Emmet Mullins-trained 50-1 shot Noble Yeats in the colours of his father Robert, riding in his last competitive race.

For all the times you’ve heard someone spit out that money has ruined football or seen cynicism employed because winning is the only currency when the financial bottom line is at stake, the result of the world’s biggest steeplechase showed there remain a few pockets where elite sport is still about pleasure and fulfilment. 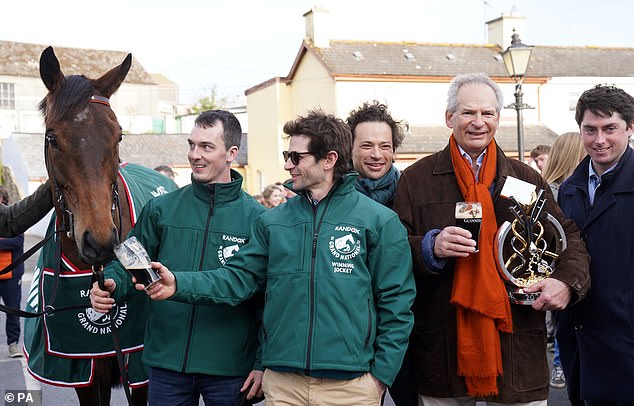 In most sports that is extinct. Amateur Laird Shepherd, brother of Flat jockey Callum, may have competed in last week’s Masters at Augusta but no-one seriously expected him to win. And although Justin Rose tied for fourth as a 17-year-old amateur in the 1998 Open, the last amateur golfer to win a major was Johnny Goodman in the 1933 US Open.

For an amateur jump jockey — it couldn’t happen on the Flat where the biggest prizes are restricted to pros — the hope persists that with the right horse you can still compete.

Waley-Cohen, the only amateur to ride in Saturday’s race, will donate his 10 per cent — about £50,000 — from the win to the Amateur Jockeys Association where it will be used for education, training and insuring his fellow amateurs. But before he flew to Ireland yesterday to take part in the traditional homecoming celebrations of Noble Yeats, Waley-Cohen, who will be 40 on Friday, said he hoped and believed he would not be the last amateur to win the Grand National. 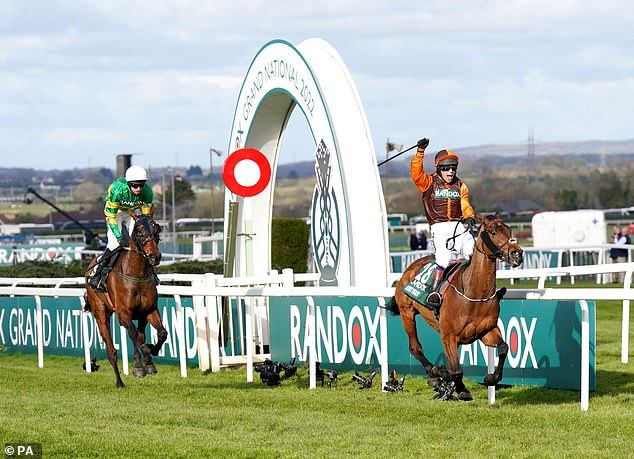 The man who runs a dental care business which has 200 practises in five countries — and employs 4,000 people for his day job — said: ‘I have nothing but admiration for the professional jockeys. It’s an unbelievably tough life being on the road so much while also having the pressure and the injuries.

‘I wanted to do the sport for the love of it. I never wanted to win a race and think about the money. I wanted to be involved in racing for every bit of the experience, whether it was for a point-to-point where there’s no money to speak of or whether it was the Gold Cup — that was irrelevant.

‘I think as soon as you go professional it inevitably becomes about earning a living. I 100 per cent think there is a future for amateur jockeys in racing. It has the amateur blood running right through it. 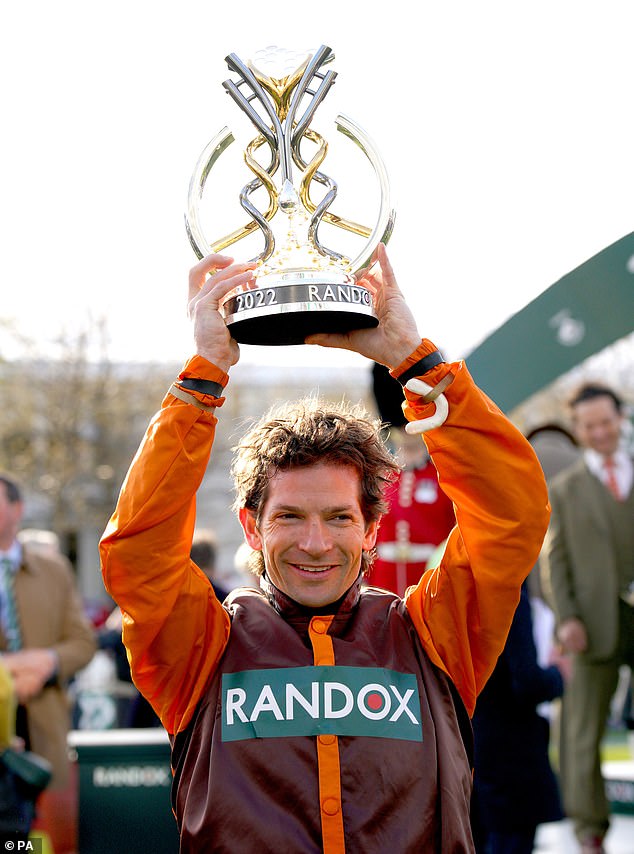 ‘It is critical for the sport to bring in energy and new people. I would hope in all sports there is a place for people who do it for a passion. It has been a dream for me and if it can inspire others to follow their path and try to make it work it would be a great outcome.’

Unlike them, the most rides he ever had in a season was 43 and he acknowledged his good fortune in having a father willing to invest in quality racehorses to ride. But Waley-Cohen, a personal friend of the Duke and Duchess of Cambridge, has a record over the famous Aintree fences that no professional can touch — seven wins from 40 rides. That includes finishing second in the 2011 National on Oscar Time and fourth on the same horse in 2013. 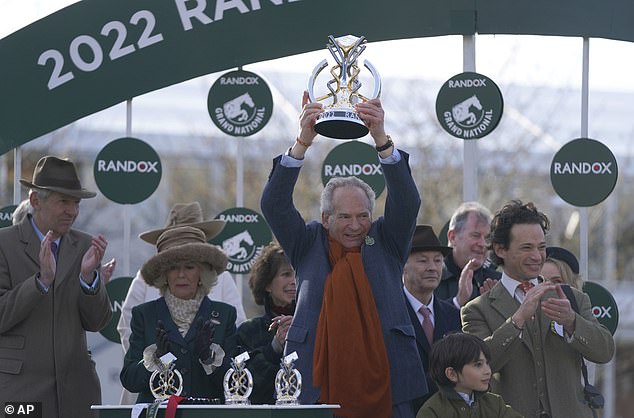 Waley-Cohen’s father, Robert, is Noble Yeats’ owner and was overcome by emotion at the win

Waley-Cohen was inspired to make the most of every opportunity by the memory of his late brother Thomas who lost his life to cancer aged 20. Thomas’s initials are stitched into his saddle.

With his business and three children — Max, nine, Scarlet, six, and two-year-old Xander — to occupy him, he will still have plenty on his hands despite not having to also throw himself into the daily training regime needed to make him physically able to take on his full-time opponents.

But most difficult may be watching someone else aboard Noble Yeats, who at seven could potentially have three more runs on the race. ‘It’s going to feel like a girlfriend going off with someone else I suppose,’ he joked. 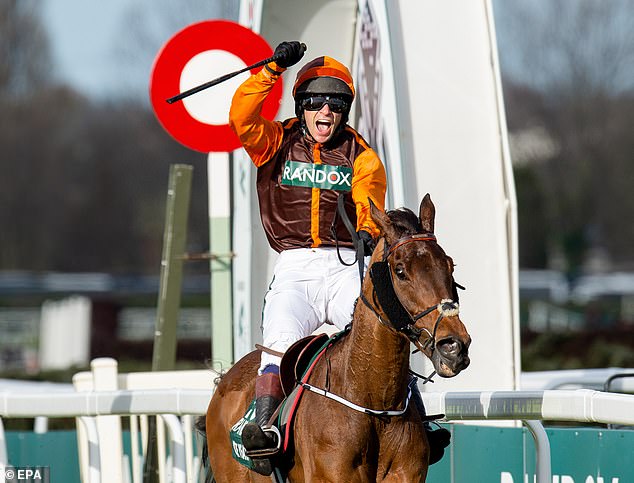 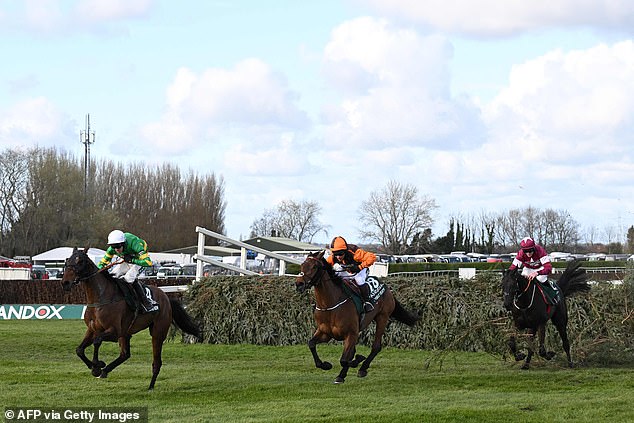 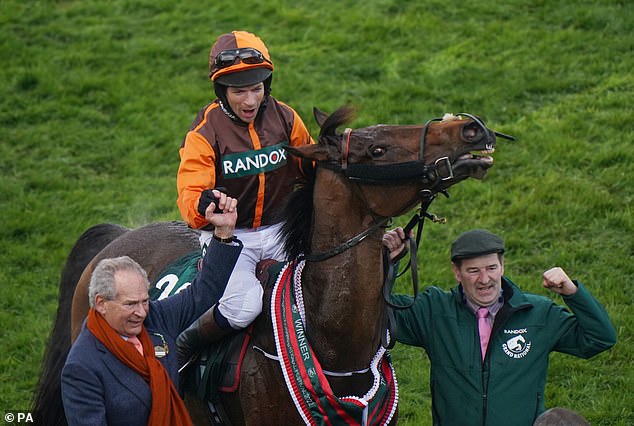 Noble Yeats is owned by Waley-Cohen’s father, Robert (left), who was overcome by emotion 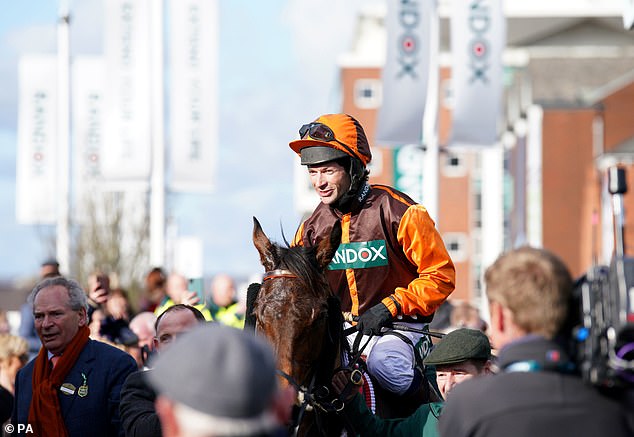