Trainer Charlie Appleby says his gut feeling is that Pinatubo ‘has trained on’ ahead of his attempt to follow in the footsteps of the mighty Frankel in the Qipco 2,000 Guineas at Newmarket on June 6.

Winner of all his six races in 2019, including the Group One National Stakes at the Curragh and Group One Dewhurst Stakes at Newmarket, Pinatubo is odds-on favourite for the delayed first Classic on the Flat season.

He will go to Newmarket after being the highest rated European two-year-old since Celtic Swing in 1994 and with his juvenile form rated better than that of Frankel, breathtaking six-length winner of the 2011 2,000 Guineas, by a panel of European handicappers.

Pinatubo (above) ready to embark on his Classic campaign, starting in the 2,000 Guineas

Appleby added: ‘We are not going to have conclusive proof until the 2,000 Guineas but my gut feeling is that Pinatubo has trained on.

‘No buttons will be pressed until the big day but from what we are seeing at home, he has gone the right way. Mentally, I see no change in him. His demeanour is the same from two to three. He remains totally relaxed.

‘Physically, though, I do see change. He has grown and strengthened over winter. You can also tell he is an experienced racehorse now. He has pleased me in his work in preparation for the Guineas.’

Appleby feels the mile of the 2,000 Guineas will be the optimum distance for Pinatubo but the trainer left the door ajar for a tilt at the mile and a half Investec Derby at Epsom now scheduled to be run on July 4. 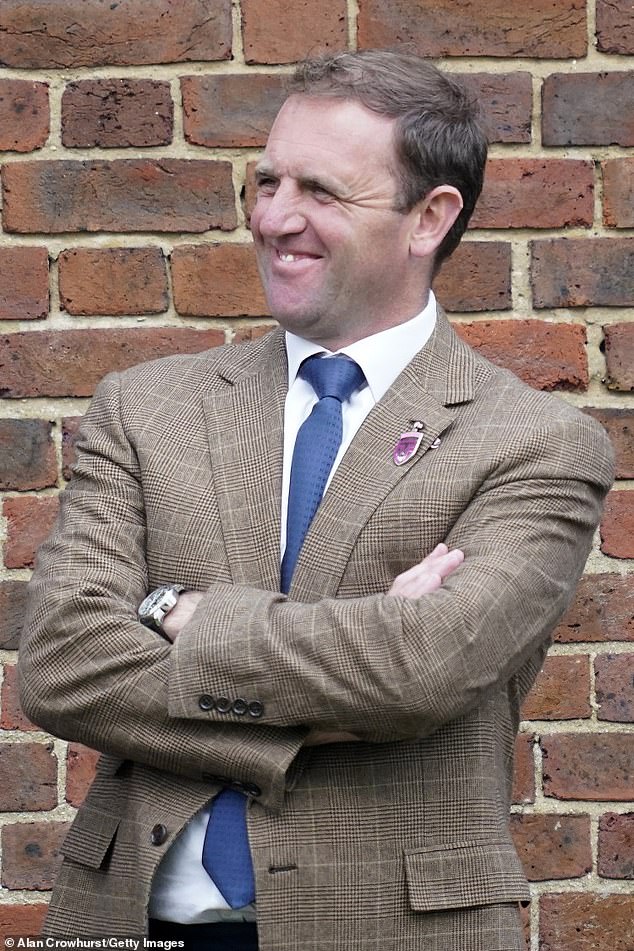 Pinatubo is 11-2 favourite for that race.

Appleby said: ‘I think the mile is going to be his trip. I believe that because of his mental attitude. He is a relaxed character, and if he was later asked to step up in trip, I think he has the right mind set for it.’

The COVID-19 pandemic and subsequent racing shut-down has caused massive disruption to the racing programme and meant trainers have had to alter their plans while continuing to train within the social-distancing and biosecurity guidelines.

The trainer said: ‘Everybody at Godolphin has continued to work incredibly hard over the past months. Despite the inevitable anxiety many have felt because of the pandemic, morale is good.

‘On Saturday, William Buick came to Moulton Paddocks to sit on Pinatubo for the first time since the Dewhurst last October and he was very pleased with him.

‘William said he gave him the same feel as when he rode him at two. It was nice and simple and he went about it in his usual professional straightforward manner. We were delighted the way he finished off the gallop, over six furlongs.

‘It was not a test. It was a piece of work to bring him on, and we now look forward to the final stages of his preparation for the Guineas.’

Appleby and Godolphin supremo Sheik Mohammed decided to keep Pinatubo in Newmarket over the Winter rather than taking him to the warmer climate of Dubai, something Godolphin do with some of their horses.

Appleby added: ‘It was decided that he should stay at home in Newmarket in familiar surroundings. It was a decision taken by His Highness Sheik Mohammed and myself for the simple reasons of not wanting to change his training style or where he trains.’

Having won on his Wolverhampton debut in May last year, Pinatubo’s form took leaps forward with victories in the Woodcote Stakes at Epsom, Chesham Stakes at Royal Ascot and Vintage Stakes at Glorious Goodwood.

Pinatubo’s peak performance came in the National Stakes at the Curragh in September when he beat Armory nine lengths.

He finished the season with a harder fought but still decisive two-length win from Arizona in the Dewhurst Stakes on soft Octobver ground.

Reflecting on the Dewhurst performance, Appleby added: ‘It was the perfect end to a great season and the fact that he was the best two-year-old in 25 years on official ratings was the cherry on top.

‘Reviewed now, I believe it was a win full of character. It came off the back of a fantastic nine-length win in the National Stakes and you could hardly expect him to repeat that on the Rowley Mile on soft ground, which he had never experienced before.

‘He toughed it out well and was galloping on strongly at the end of a long season. His debut run had been on May 10.’

Appleby is also hoping to run Al Suhail in the 2,000 Guineas. He finished third to Positive in the 2019 Solario Stakes at Sandown and runner-up to Military March in the Autumn Stakes at Newmarket.

Appleby said: ‘Al Suhail has worked well and we will look at running him in the 2,000 Guineas at Newmarket with a view to stepping him up in trip to run in the Derby.

‘He is a very interesting colt. He has a lot of natural pace, but his pedigree suggests he should stay the Derby trip (he is by Dubawi out an Oaks runner-up Shirocco Star).

‘I was pleased with his second to Military March in the Autumn Stakes as he went to the line well and they were seven lengths clear of the third.

Appleby is ready to hit the ground running with his stable when the season hopefully starts on June 1.

He is aiming group-one-winning five-year-old Ghaiyyath, who won the Dubai Millenium Stakes at Meydan in Dubai in February, at the Coronation Cup at Newmarket on June 5.

Barney Roy is already a group one winner in 2020 having won the Jebel Hatta at Meydan in March.

Two-year-old’s Appleby picks out to keepo an eye on are Frankel colt Magical Land – ‘an early type, who should be running very soon’ – and Creative Force, a son of Dubawi who ‘has a lot of natural speed’, according to his trainer.

Noble Dynasty, a son of Dubawi and half-brother to Barney Roy who became the world’s most expensive yearling colt in 2019 when sold for 3.6million guineas, is another to watch for.