It will be the 50th anniversary of Mill Reef’s memorable Derby win next month and appropriately the Balding family will be represented by Youth Spirit after the colt landed Wednesday’s Chester Vase.

Ian Balding trained the great Mill Reef to win the Classic in 1971. Youth Spirit, trained by his son Andrew, heads to the Cazoo Derby as a 25-1 outsider after beating Sandhurst a length-and-three-quarters in a trial which lacked depth.

But the Tom Marquand-ridden winner, owned like last year’s 50-1 Derby runner-up Khalifa Sat by Ahmad Al Shaik, banished stamina doubts on rain-softened ground and did enough to warrant an Epsom starting berth after his victory. 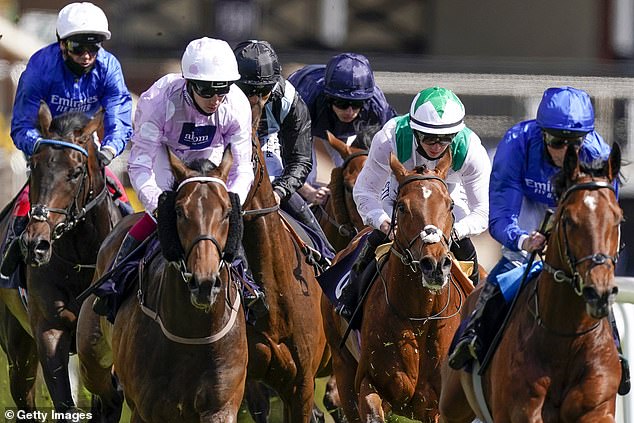 Marquand said: ‘The one question he had to answer was the trip and you’d have to say he hit the line extremely well. It was a muddly race, but he’ll stay in an honest-run race as well. He was really tough, stuck his head out and was there for me.’

The disappointing run in the Chester Vase came from favourite Wirko. The William Buick-ridden Godolphin colt had looked like he would relish the step up to a mile and half when winning the two-furlong shorter Blue Riband Trial at Epsom. But after dictating things in front he faded quickly to finish fourth.

The best Epsom trial on the opening day of Chester’s May meeting, however, was the Cheshire Oaks. Mark Johnston-trained winner Dubai Fountain is 14-1 for the Cazoo Oaks after her length win under Franny Norton.

The tenderly-handled Roger Varian-trained runner-up Zeyaadah, who gave away 3lb and a head-start when racing at the back of the field, is also a 14-1 shot for Epsom.

Dubai Fountain had some solid two-year-old form, including second in the May Hill Stakes and fourth in the Fillies’ Mile.

Johnston said: ‘She obviously failed to win a Group race last year but she ran some great races. We’ve been thinking about the Oaks for a long time.’

Aidan O’Brien has scrapped plans to give Derby ante-post favourite High Definition his seasonal debut in Saturday’s Lingfield Derby Trial because of unsatisfactory blood tests. With the premier Classic just over four weeks away, O’Brien has not got a lot of room for manoeuvre.

THE two-month pilot using saliva testing to screen jockeys for cocaine has started with the BHA confirming testing took place at Kempton on Monday and Lingfield on Tuesday.

All jockeys tested were negative.