The British Horseracing Authority says the fact the North East of England is a hotspot for Covid-19 infection rates should not jeopardise the sport’s resumption at Newcastle a week on Monday.

Last week, French racing authorities were forced to relocate fixtures from tracks in Paris and the north east of France after their Government reversed a decision and stopped racing in Red Zones of high coronavirus infection.

Sunderland, Gateshead, South Tyneside and Middlesbrough have the worst infection rates in Britain at present.

But the BHA say their plans minimise risk, as well as contact, given the location of any racecourse. A BHA spokesman said: ‘In general, the main issue in behind-closed-doors events is managing the risk to the people attending and keeping them safe.

‘Our guidelines require attendees to have little or no contact with the local community. Attendees are expected to go straight to and from the venue.

‘Those people attending who do live locally are going back to work after medical screening and into a controlled environment. That is not the case with nearly every other local place of work. Ultimately, the Government will weigh all these issues up. There are no geographically-based restrictions in England at present.’

Racing faces an anxious wait for the Government green light but BHA chief regulatory officer Brant Dunshea said he is ‘incredibly confident’ the sport will be able to restart next Monday.

Dunshea added that the Government recognises racing can operate with lower levels of risk than contact sports such as football and rugby.

The demand for action will become evident on Tuesday when entries for the first fixture will be made by trainers. Over the weekend, the BHA released a 33-page document outlining the protocols that all those attending a race meeting in the initial phase of return must observe. 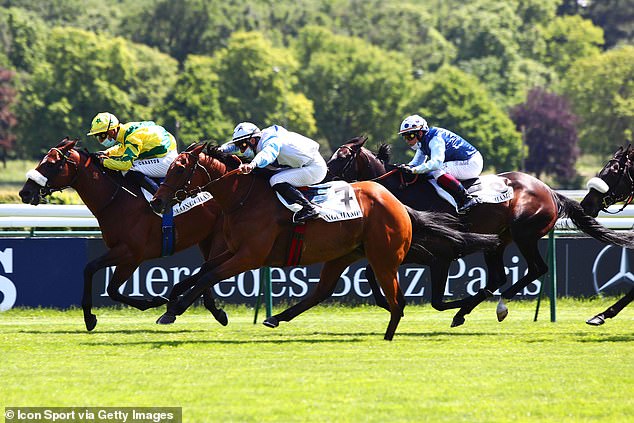 These include health questionnaires and temperature testing.

Newcastle’s plans are well advanced. A changing area capable of hosting 50 jockeys — all two metres apart — has been constructed in an area previously used as a bar in the main grandstand.

Access to the weighing room will be via a one-way system to weigh out only. The paddock will be divided into a grid to keep participants apart.