Caleb Ewan hopes to ‘keep winning’ after taking victory in a sprint finish to stage three of the Tour de France in Sisteron, denying Sam Bennett on the line.

Australian Ewan (Lotto-Soudal) appeared from nowhere to weave his way through a congested bunch and pass Irishman Bennett (Deceuninck-Quick Step) just before the finish line. 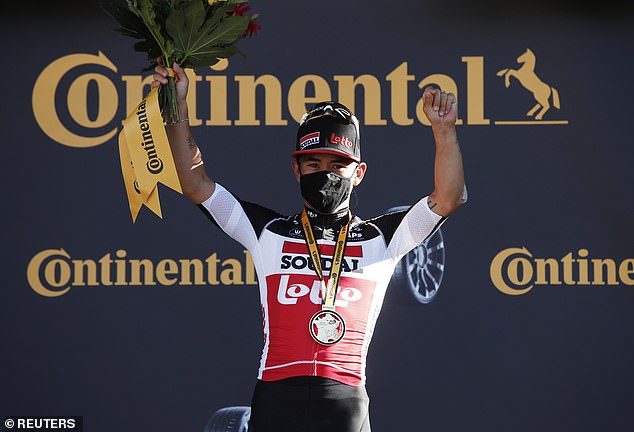 It was Ewan’s fourth Tour stage win after three victories on his debut last year and after the race he said: ‘The last few days haven’t been great for us, after we crashed on the first day and lost a couple of guys.

‘But everyone stayed motivated and we all knew if it all went right, I could win the sprint today. Everyone today gave it 110 per cent and it worked.

‘This is the biggest race in the world and I’m so happy to get another win and prove last year wasn’t a fluke. I hope to keep coming back and keep winning.

‘With the calibre of sprinter here it’s always going to be hard but we have a few more opportunities and I think we’ll take them when they come.’

Ewan displayed excellent bike handling skills to navigate his way through a chaotic finish. The 26-year-old narrowly avoided Peter Sagan’s back wheel and the right-hand side barrier to get onto Bennett’s wheel before he kicked clear with tremendous speed at the 50-metre marker. 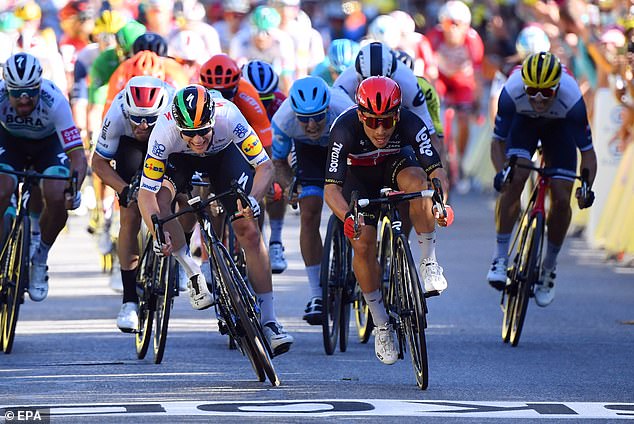 ‘I was a bit too far forward in the final kilometre so I dropped back and gave myself a bit of a rest,’ said Ewan ‘Coming from behind is a bit of a risk but I got through past the barrier and had the speed in the end.’

The high octane finish to the race was in contrast to a largely sedate day, with France’s Jerome Cousin spending 110km off the front alone before he was swept by the peloton with 16km to go.

Cousin had been in a breakaway with compatriots Benoit Cosnefroy and Anthony Perez, who was forced out of the race with a broken collarbone after he suffered a puncture and crashed into his Cofidis team car.