Champ finished second in the Betfair Game Spirit Chase at Newbury on Sunday but still gave his chances in next month’s Cheltenham Gold Cup a major boost.

The Nicky Henderson-trained chaser is now the shortest-priced British contender for the Gold Cup after being cut to 7-1 third favourite following his two lengths second to Sceau Royal.

Champ was running for the first time since winning the RSA Chase at last year’s Cheltenham Festival, his return having been delayed by a breathing operation. 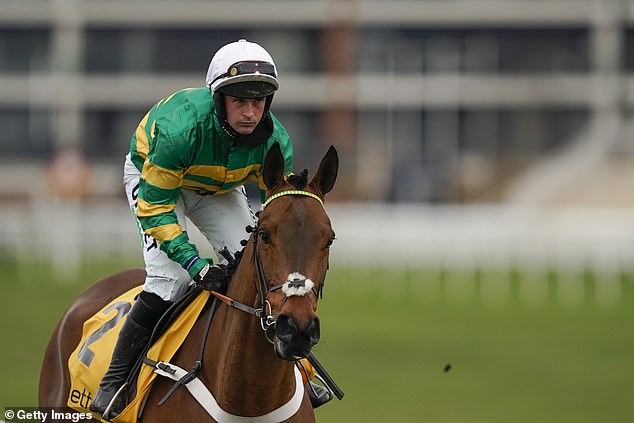 Sunday’s race distance — a mile and a quarter shorter than the Gold Cup — was way short of Champ’s optimum. But most encouraging of all was that his jumping, which had appeared a potential issue in his novice season, looked much slicker.

Henderson said: ‘His jumping was great. We have, not surprisingly, been working on it. He has done lots of schooling. That will have done him the world of good.

‘He is an extraordinary horse because when he comes to a racecourse it is like flicking a switch. What he does at home would not inspire you.’

Sceau Royal has been a solid performer at the top level in two-mile chases. He finished third to Altior in the 2019 Queen Mother Chase. Whether he runs there again will depend on the ground not being too soft, according to trainer Alan King.

The Betfair Hurdle went to Soaring Glory, trained by Jonjo O’Neill and ridden by his son Jonjo junior. He could run in the Supreme Novices’ Hurdle.

Both seem likely to bypass Cheltenham to be aimed at the Betway Bowl at Aintree.

The gloss was taken off the race when David Bridgwater-trained The Conditional, a winner at last season’s Cheltenham Festival and a leading Grand National hope, suffered a fatal leg injury.

At Navan, trainer Gordon Elliott insisted he was satisfied with dual Grand National winner Tiger Roll despite him being beaten almost 65 lengths when last of six to Beacon Light in the Boyne Hurdle in testing ground he doesn’t like.

His next run will be the Cross Country Chase at Cheltenham.