Aidan O’Brien beefed up his Derby challenge on Wednesday when Changingoftheguard brushed aside odds-on favourite New London with a six-and-a-half length win in the Chester Vase.

Luxembourg, the 2,000 Guineas third and 2-1 Derby favourite, is O’Brien’s No 1 contender for the Classic on June 4.

But a front-running display from Ryan Moore-ridden Changingoftheguard in the mile-and-a-half Vase not only proved his stamina for the Derby, but put a huge hole in the aspirations of previously unbeaten, Charlie Appleby-trained New London. 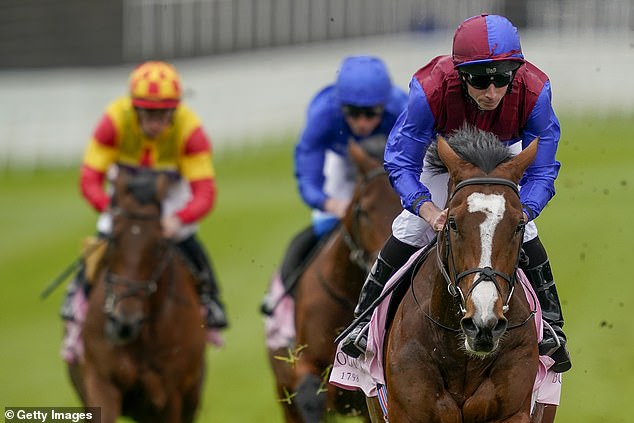 The result prompted the Derby odds for Changingoftheguard, who went into the race off the back of a win at Dundalk’s all-weather track, to be cut to 8-1 from 50-1 while New London, who looked ill-at-ease around Chester’s tight circuit, was pushed out to 14-1.

O’Brien said: ‘We were delighted with the run and you’d have to say he’ll go to Epsom. There was no doubt on our part that he would improve for going up in trip.’

O’Brien and Moore also boosted their Oaks squad when Thoughts Of June employed similarly positive tactics to hold off Joseph O’Brien-trained Above The Curve by a neck in the Cheshire Oaks. Thoughts Of June had been beaten by the runner-up at Leopardstown last month and the reversal looked as much down to a perfectly executed ride from Moore as an improved performance.

The biggest smile on track belonged to former England striker Michael Owen after Ever Given streaked home in the Deepbridge Handicap to give trainer Hugo Palmer his first Chester win since he took over at Owen’s Cheshire Stable.

Owen had been a pundit on the Villarreal-Liverpool semi-final the night before and left his hotel in Spain at 3.30am to get back to Chester in time.

His focus today will be on Derby outsider Mr McCann, owned by a clutch of Liverpool players, in the Dee Stakes. Owen said: ‘They have had bigger things on their plate but now the (Villarreal) game is done I am sure they’ll tune in.’