With the Champion Hurdle already in the bag through Honeysuckle and a top-class book of rides to come through the rest of the week, Blackmore is proving unstoppable.

Harry Cobden tried to dominate from the front at a steady tempo on Bravemansgame and in the early stages the Henry de Bromhead-trained Bob Olinger (6-4 favourite) was keen enough, pulling himself into second position. 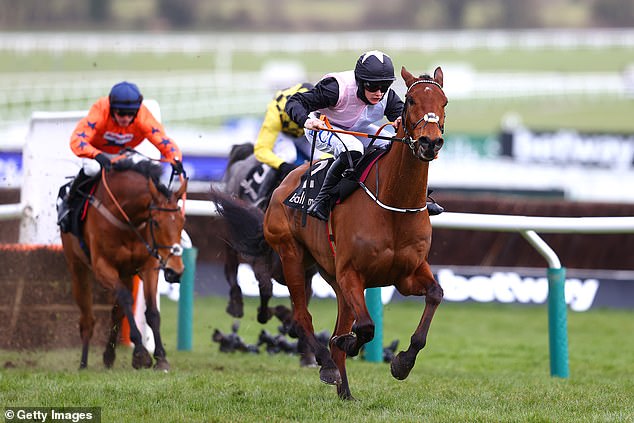 As they went down the back straight Bear Ghylls attempted to inject some pace to the race and put pressure on the leader, as Blackmore sat in wait.

Paul Townend was scraping the paint on Gaillard Du Mesnil and did get a little short of room at the second-last, as Blackmore forced her way between Bravemansgame and Bear Ghylls.

But turning in there was only going to be one winner and it was a matter of ‘how far?’. The answer was seven and a half lengths back to Gaillard Du Mesnil.

De Bromhead said: ‘I’m delighted with him. Rachael was brilliant on him again and he couldn’t have done it any better. 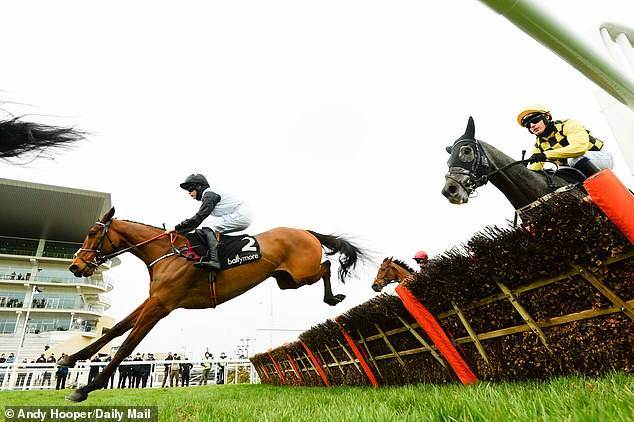 ‘I started the season aiming at the Supreme, but everyone persuaded me, quite rightly, to step up in trip.

‘We were very hopeful coming here, but it was obviously a very good race and you never know on the day.’

On future plans, he added: ‘We’ll get through his novice season and see.

‘He’s built like a chaser and jumps like one, so we’d normally look at going that way, but we’ll speak to Brian (Acheson, owner) and Robcour and see what everyone would like to do. We’ll enjoy today.’

He said: ‘She was great and was really good this morning. We’re delighted with her – she’s full of herself.

‘I’d imagine we’ll probably look towards Punchestown, but we haven’t decided yet.’

Blackmore said: ‘That was fantastic. I’m so delighted for Brian Acheson and his family. They put a lot of into the game and to get a win like that today is phenomenal – they’ve got a very special horse on their hands.

‘I didn’t get as smooth a run as I thought I would in such a small field. He was a little bit keen passing the stands the first time, but the manner in which he’s done it, he’s a massive future ahead of him. 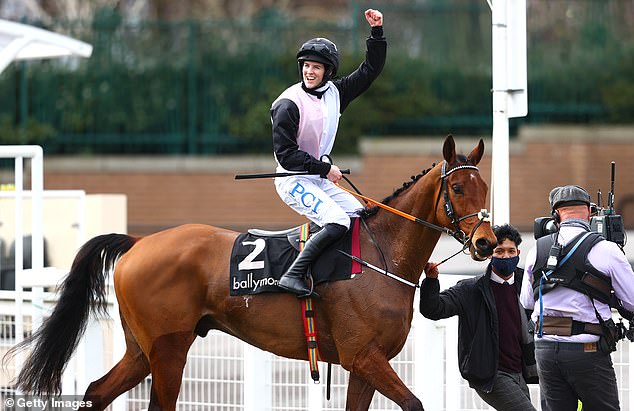 Riding Bob Olinger, Blackmore held her nerve despite a late mistake to roar to victory

‘He stays and has a helluva a lot of speed as well.

‘A lot of people have thought an awful lot of this horse, so it’s great he could go and do that today and really show what he’s made of.’

Reflecting on Honeysuckle, she said: ‘I’m still speechless after yesterday. It was a massive day and I’m still pinching myself.

‘I don’t think I’ll get to reflect on it until the week is done maybe.

‘We’re steamrolling on to today and we’ll reflect at some stage.’