Victory for the Willie Mullins-trained favourite would see him join Cottage Rake, Arkle and Best Mate as three-time race winners.

Mullins is also represented by Kemboy, who is having his third run in the race, after unseating his rider in 2019 and finishing seventh last year. 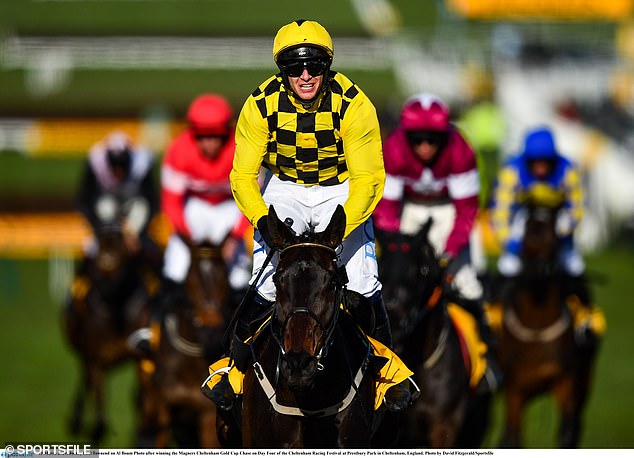 The field includes A Plus Tard, the mount of Rachael Blackmore, and King George VI Chase winner Frodon, ridden by Bryony Frost.

Trainer Henry de Bromhead says Tuesday’s Champion Hurdle winner Honeysuckle may try to extend her unbeaten record to 12 races at the Punchestown Festival next month, added: “Honeysuckle was great this morning really good, full of herself. I will imagine we will probably look towards Punchestown, but we haven’t discussed it yet.”

THE SHUNTER will earn his team a £100,000 bonus if he can win the Paddy Power Plate Handicap Chase.

The eight-year-old, trained in Ireland by Emmet Mullins and ridden by Jordan Gainford, earned the right to shoot for the bonus after winning the Bet365 Morebattle Hurdle at Kelso at the start of the month.

Meanwhile, Langer Dan, the easy winner of Saturday’s Imperial Cup at Sandown, will bid for the £50,000 bonus on offer for a horse who can win that contest and also land a race at the Festival Dan Skelton-trained Langer Dan has made the cut for tomorrow’s Martin Pipe Conditional Jockeys’ Handicap Hurdle.

Skelton said: ‘He’s been absolutely fine (since Sandown). He’s fresh and well and I suppose we are taking on the time between the races as much as anything.’

The Imperial Cup-related bonus has been won three times — Olympian (1993), Blowing Wind (1998) and Gaspara (2007). The first two were trained by Martin Pipe and the last-named by his son David.

Trainer Paul Hennessy, who landed yesterday’s County Hurdle with Heaven Help Us, has only three horses at his County Kilkenny base.

But he has 40 greyhounds and has trained two winners of the English Greyhound Derby: Jaytee Jet (2016) and Priceless Blake (2019).

THE Festival suffered its first fatality when Kings Temptation suffered a forelimb fracture in the cross country race.

Paul Nicholls hope Politologue will be able to run in the Celebration Chase at Sandown next month after his last-minute withdrawal from the Queen Mother Champion Chase.

The defending champion was pulled out after a trickle of blood was detected in a nostril with Nicholls’ staff unsure whether he had broken a blood vessel or banged his head.

Nicholls said: ‘It is a tiny nose bleed but you can’t take a chance. ‘If something happened to him in a race we would never forgive ourselves.’