As Paul Nicholls was putting the finishing touches to his team on Tuesday, the 11-time champion trainer admitted it was going to be a very different Cheltenham Festival except for one thing: ‘The buzz around the yard.’

The strangest Festival ever staged will look and sound very unusual despite ITV’s decision to play out the traditional roar of an expectant crowd before the opening Sky Bet Supreme Novices’ Hurdle on Tuesday.

But every one of the eight runners will still be desperate to win one of the most coveted prizes on offer in jump racing. 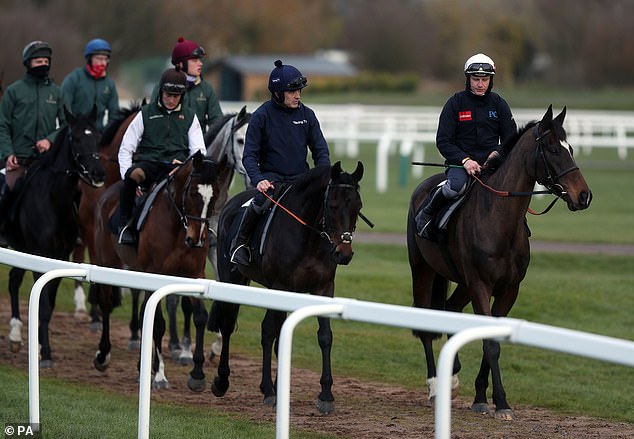 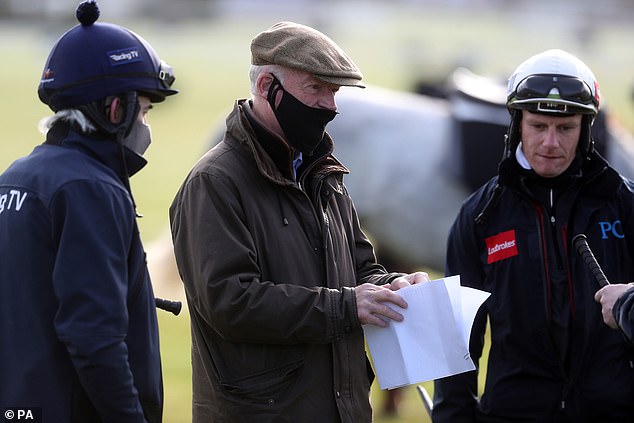 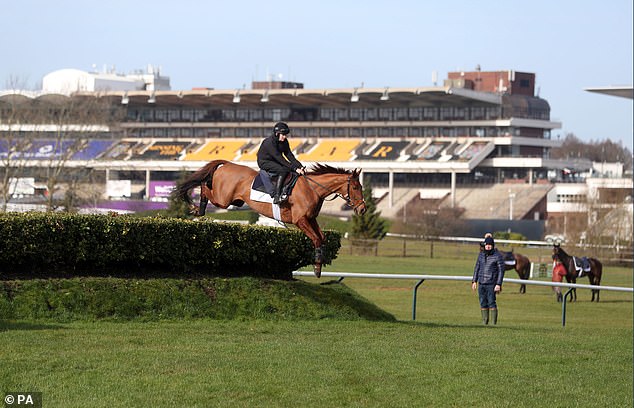 Where normally racegoers would be packed in like sardines, the stark concrete steps of the empty grandstands will be softened by discreetly placed sponsors’ banners. But every jockey and groom will still remember the emotional, if silent, victory walk back to the winners’ enclosure for the rest of their lives.

In a very real sense this sporting landscape will be a sobering experience — there will be no Guinness Village after all!

But there will still be times when those who achieve career-defining feats are drunk on euphoria.

Nicholls, whose best chances include Bravemansgame in Wednesday’s Ballymore Novices’ Hurdle and defending champion Politologue in the Queen Mother Champion Chase, said: ‘It will be completely different with no owners, no crowds and no socialising — a once-in-a-lifetime experience. There will not be the usual razzamatazz. But what will be no different is the competitive racing. The buzz around the yard this morning was exactly the same as normal.

‘A Cheltenham winner is great. It’s what everyone wants. That doesn’t change but you just have to feel sorry for the owners who will be sitting at home watching.’ 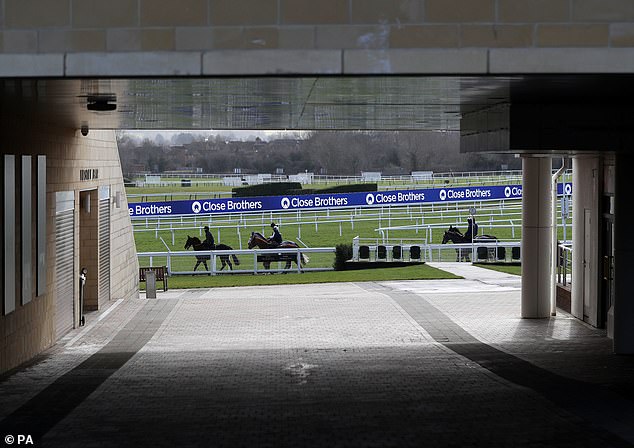 That is what virtually everyone will be doing over the next four days. Where around 250,000 racegoers normally pass through the gates in Festival week, it is likely fewer than 500 will be on site each day and that will include the 100 grooms looking after the Irish horses for whom the racecourse is home for the week.

Their en-suite cabins in the Best Mate Enclosure are another reminder that this is the Covid-19 Cheltenham Mk II. The debate about whether the Covid-19 Cheltenham Mk I should have gone ahead last year — despite officials following Government advice in the week before the first UK lockdown — continues to rage and will probably do so until a post-pandemic public enquiry. That remains an elephant in the room this week.

Dr Jerry Hill, the BHA’s chief medical adviser who has been responsible for putting the Covid protocols in place this week in conjunction with colleagues from the Irish racing authorities, said: ‘Would we have done something different with a different set of knowledge? Of course history teaches us things.

‘We now know so much more about how best to control it, how to continue functioning as a society and a sport. If we look back at that time we were at the beginning of that learning curve.

‘Everyone was seeking information which has gradually become available. At the time we sought information from people who were experts in infectious diseases. We followed their advice.

‘I spent time learning a huge amount about our industry and relationships and people’s resilience. I have learned a lot about Covid as well. That was knowledge we didn’t have a year ago.’

The Covid debate was always going to cast a shadow over the Festival. What wasn’t expected was the dark cloud that has moved into the Cotswolds because of the Gordon Elliott furore. 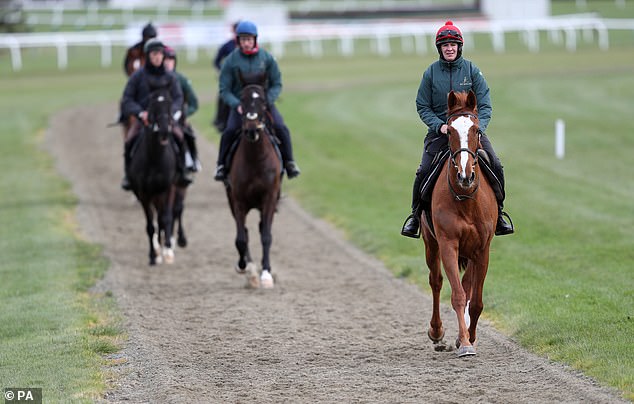 Only participants, officials and limited media will be allowed at the racecourse

The photo of a man who has trained 32 Festival winners sitting on a dead horse caused almost as much damage to the wider sport as to Elliott himself. Elliott’s licence has been suspended by the IHRB but he will be the ghost at the party.

Horses that until a fortnight ago were running in his name, including Tuesday’s Champion Hurdle hope Abacadabras and two-time Grand National winner Tiger Roll in Wednesday’s Cross Country Chase, may be temporarily in the charge of Denise Foster, a caretaker trainer at Elliott’s County Meath stable, but there will be many who won’t feel the joy if they win.

There are also Elliott horses like Supreme Novices’ Hurdle hope Ballyadam who have been switched to new stables.

Will what they achieve be overshadowed by the mistake of their ex-trainer? The Elliott affair will also intensify the spotlight on horse welfare should there be injuries or deaths at the meeting, an unfair but almost unavoidable conflation.

Despite these twin towers of negativity, Ian Renton, the Jockey Club official in charge of Cheltenham, insists his team are ‘very much in positive mode’. He said: ‘It has been a very difficult time for all, not just in racing. The mood in the nation is beginning to look forward. The Festival tends to be the harbinger of spring and the beginning of things opening up in this country for the summer.

‘I think we can be that again. Let’s put all the negatives behind us and look forward to four fantastic days’ racing and all the opportunities. If you look at the 28 races, I don’t think anyone can fail to be excited.’

There are disappointingly small fields in certain races — Tuesday’s Supreme Novices’ Hurdle has a single-figure line-up for the first time since it became a single-division contest in 1972.

SO, WHAT’S GOING TO BE DIFFERENT THIS YEAR?

Around 250,000 spectators attend the Cheltenham Festival normally but it will be very different this week with deserted grandstands and Covid-19 protocols in place…

One reason may be an absence of ‘social runners’ — who line up mainly because their owners fancy a Festival day out.

But many will be rooting for Jamie Moore and Goshen after their heartbreak demise at the final flight in last year’s Triumph Hurdle. We will also see three brilliant novice chasers — Shiskin in Tuesday’s Arkle Novices’ Chase, Monkfish, who is already being spoken of as a 2022 Gold Cup contender, in Wednesday’s Brown Advisory Novices’ Chase, and unbeaten dual Festival winner Envoi Allen in Thursday’s Marsh Novices’ Chase.

History beckons on Friday. Can Willie Mullins-trained Al Boum Photo join Arkle, Best Mate and Cottage Rake as a three-time Gold Cup winner or could it be a first success in the race for a female jockey with Bryony Frost-ridden Frodon and Blackmore’s mount A Plus Tard prominent in the betting?

Yes, this will be a very different Cheltenham Festival but the action should be as thrilling as ever.