Chester Racecourse reveal plans for 5,000 spectators a day to attend May festival with mass on-site Covid testing and racegoers given staggered arrival times to avoid congestion

Chester have unveiled plans to allow 5,000 spectators into their May meeting, with each attendee having an on-site Covid test.

The proposal would see 1,800 lateral flow tests performed per hour at three separate sites at the course, with racegoers given staggered arrival times to avoid congestion.

Chester’s entire programme last year was staged behind closed doors. The track have said they could not viably stage fixtures this year if that did not change. 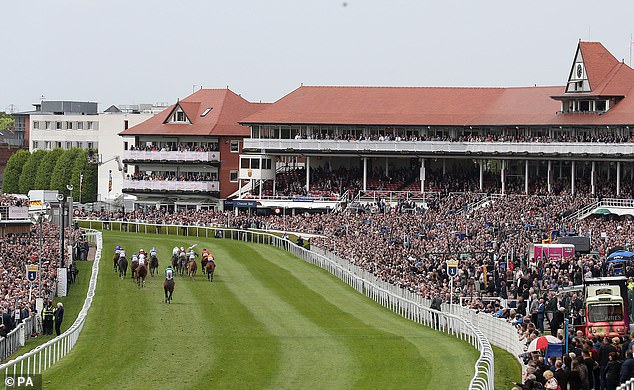 Chester has a plan to host up to 5,000 racegoers on each day of the popular May meeting

Chief executive Richard Thomas said that anything less than 5,000 spectators meant a race day would lose money and the proposal could be a way of accelerating an increase in the number of spectators when the Government begins to ease restrictions.

Thomas, who acknowledged the plan would need approval from the BHA and to fall within Government protocols, said: ‘This is just a starting point. We will be having more conversations with the local authority and hope to have them with the Government.’

Meanwhile, Trainer Gordon Elliott has ruled the injured Delta Work out of the Cheltenham Gold Cup, where he finished fifth last year.