High noon for this season’s top two-year-olds looks like taking place at Deauville next month now that Karl Burke has set his sights on the Prix Morny with Dandalla after her victory in the Bet365 Duchess of Cambridge Stakes at Newmarket.

Dandalla, emphatic winner of the Albany Stakes at Royal Ascot, had to dig much deeper to hold Fev Rover by a head yesterday under jockey Ben Curtis.

But Burke cited unsuitable ground and a glitch in Dandalla’s preparation to mark up the performance, as well as drawing favourable comparisons with his six-time Group-One winning filly Laurens. He said: ‘Dandalla is a high-quality filly and Ben was adamant that the tacky ground did not help her.

‘It wasn’t plain sailing going into the race. We had a small issue about 10 days ago when she had a slight temperature and we took a little bit of a chance but we got away with it.

‘She has had three quick runs. We will give her a bit of time and then prep her for the Prix Morny. It makes sense now to have a crack at the boys in the Group One.

‘It’s amazing to get another so good quickly after Laurens. Laurens was a slow-burner but Dandalla is definitely more precocious and would have a better turn of foot.’ 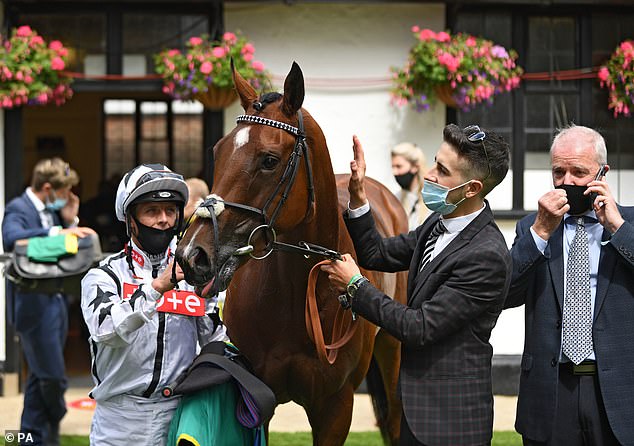 PJ McDonald, who rode Laurens in most of her races, had a landmark of his own to celebrate when securing his 1,000th British winner on Zabeel Champion in the Bet365 Handicap.

The Falmouth Stakes, feature Group One on the middle day of the July Meeting, went to trainer John Gosden but not how most expected. It was 9-2 shot Nazeef, ridden by Jim Crowley, who held off Billesdon Brook by a neck, with the winner’s odds-on stablemate Terrebellum and Frankie Dettori a neck further back.

Gosden admitted he was disappointed by Terebellum’s run after her second in the Queen Anne Stakes at Royal Ascot but Nazeef has now won six races on the bounce, graduating from handicaps to the highest level to more than justify the decision of owner Sheik Hamdan Al Maktoum to keep his filly in training.

Overseas action this weekend revolves around Pinatubo’s attempt to get back to winning ways as he drops back to seven furlongs from a mile in Sunday’s Group One Prix Jean Prat at Deauville.