Jockey Daryl Jacob set his sights on the Grand National with Bristol de Mai after the Nigel Twiston-Davies-trained grey landed the Betfair Chase for a third time.

The nine-year-old repelled the strong challenge of Clan Des Obeaux to win by two lengths, with 2019 winner Lostintranslation a disappointing third a further 45 lengths behind.

Bristol de Mai, who won the race in 2017 and 2018, reserves his best for the flat, left-handed circuit at Haydock where his record is five wins and a second from six.

Jacob, whose hopes had been raised by heavy rain turning conditions testing, believes Aintree’s similar configuration will suit his mount.

‘I’d love a crack at the National,’ he said. ‘His jumping is good and he’s brave when you need him to be. He’s nine now, rising 10, so if there is a season to do it this is it.

‘It always felt I had enough horse underneath me to get home today. He has been wonderful here. Hopefully he’ll get the recognition he deserves.’ 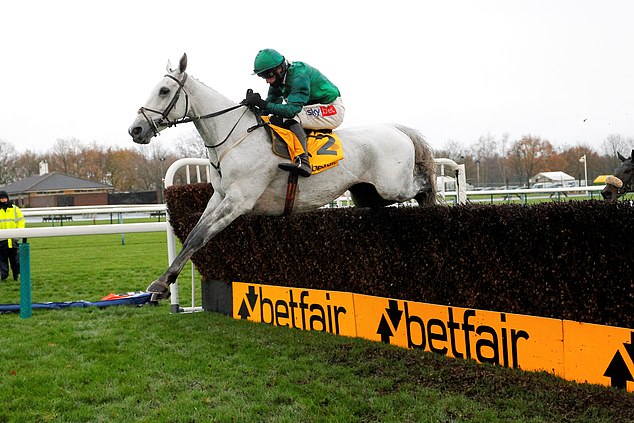