Aidan O’Brien has put an additional unexpected hurdle in front of Stradivarius’s bid for a fifth Royal Ascot victory and a record-equalling fourth success in Thursday’s Ascot Gold Cup by supplementing 2020 Derby winner Serpentine to the line-up at a cost of £30,000.

Serpentine, who has never raced beyond a mile and a half, will be the first Derby winner to run in the two-and-a-half-mile centrepiece of the Royal meeting since Blakeney in 1970.

The last horse to win both the Derby and the Ascot Gold Cup was Ocean Swell in 1945. 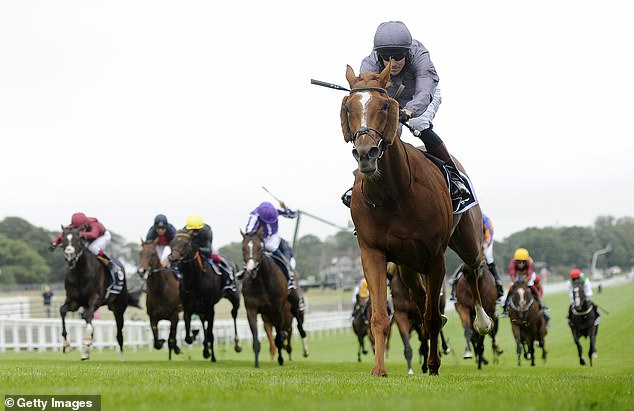 Serpentine, who was beaten 17 lengths on his seasonal debut in the 10-furlong Tattersalls Gold Cup at the Curragh, is a 12-1 shot.

Michael Shinners of SkyBet said: ‘Serpentine adds an extra dimension to an already fascinating Ascot Gold Cup but he is going up against one of the all-time greats of the staying division.’

Stradivarius, who is odds-on favourite, breezed through a routine work-out yesterday under Frankie Dettori.

His trainer John Gosden said: ‘Frankie gave him a little canter and it all went smoothly.’

Trainer George Boughey said: ‘It’s a credit for what Mark has done for us and himself this year. He is flying.

‘He is right up there in the apprentice title race and will get our full backing. To give him a ride in a Royal Ascot two-year-old race shows what I think of him.’