Frankie Dettori scored his flying dismount a six out of 10 but the performance of Frankly Darling, his winning mount in Tuesday’s Ribblesdale Stakes, earned close to full marks.

The daughter of Frankel, who carries the black and white colours of Anthony Oppenheimer which were sported by Dettori on his 2015 Derby and Arc winner Golden Horn, is now 10-3 second favourite for the Investec Oaks at Epsom on July 4.

Frankly Darling, who now looks the biggest danger to Aidan O’Brien’s favourite Love, the 1,000 Guineas winner, succeeded despite racing too keenly in the early stages.

Dettori, recording his 68th royal meeting winner, said: ‘She has some lungs. She was burning plenty of petrol in the first half of the race, over-racing a bit. She had every chance of stopping if she wanted to, but she picked up and galloped out really well.

‘I guess it is all systems go for the Oaks. It was only her third start and she has learned a bit.’

The racing was top quality on Tuesday but there was always the fear that with no spectators it might lack sparkle. 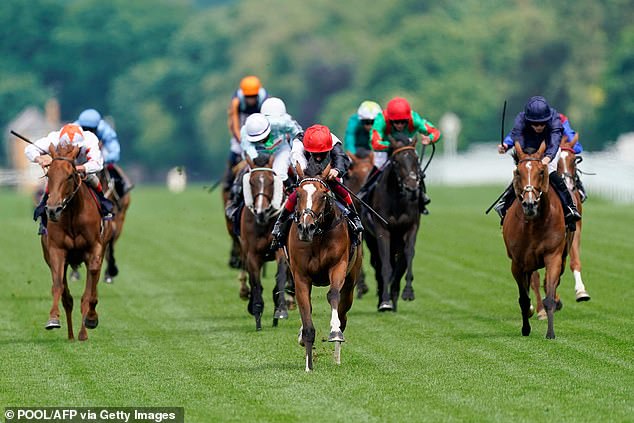 Dettori tried to inject a little of the glitter. He had said going into the meeting that he didn’t know if he would perform a flying dismount, but it was always short odds he would find it hard to resist, cupping his ears as if playing to a crowd before launching himself in the winner’s enclosure.

But the Italian, narrowly edged out on Terebellum in the Queen Anne Stakes by Circus Maximus, ridden by his big royal meeting rival Ryan Moore, admitted getting revved up for the action had required a caffeine boost.

Dettori said: ‘The flying dismount was a six out of 10. There is no crowd but it is still Royal Ascot so I thought I might as well celebrate in style. 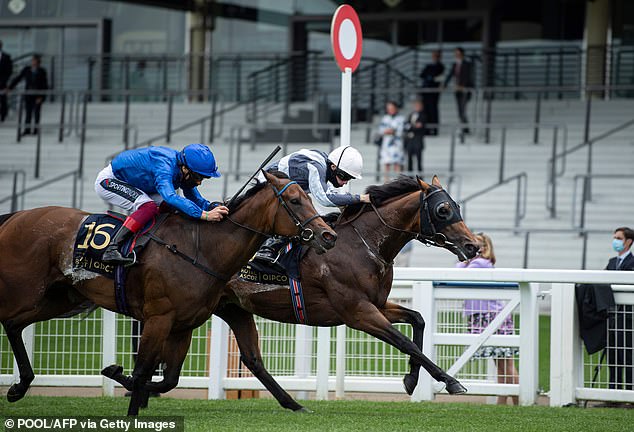 ‘For the first race it was very hard to pick myself up. I usually walk in and I am signing autographs and people are slapping me on the back but it was the opposite today.

‘I had two or three espressos just to get me going. Now the adrenaline is pumping I am fine but I needed to catch Ryan up. I can’t let him get too much of a lead. It is a bit like the Tour de France — every second counts.’

Frankly Darling had been a winner at Newcastle on June 1, the day racing returned after the Covid-19 shutdown.

Gosden, who went on to record his 51st royal meeting winner with Jim Crowley-ridden Nazeef in the Duke Of Cambridge Stakes, said: ‘I don’t think I am spoilt for choice for the Oaks. If I have an Oaks filly, it’s her.

‘She’s still learning and a little wild. There’s a bit of Frankel about her — she showed an awful lot of class.’