Frankie Dettori faces the biggest ride of his long and distinguished career on Sunday when he tries to make history by guiding Enable to a record third win in the Qatar Prix de L’Arc de Triomphe at Longchamp.

That is the verdict of Classic-winning-jockey-turned ITV and Sky pundit Jason Weaver.

The withdrawal of biggest rival Love has seen Enable’s odds cut to 11-10 but persistent rain all week has turned the Longchamp ground even heavier than it was last year when Enable struck the front 400 metres from the finish only to be swallowed up in the final 50m by Waldgeist, who she had beaten in their three previous meetings.

WHO COULD TOPPLE DETTORI?

Three-time winner of the Ascot Gold Cup. Beaten in a slowly-run Prix Foy at Longchamp but stamina-sapping conditions will play to his strengths.

The winner of the Derby with a powerful front-running performance. Beaten on only run since when ridden with restraint after a long break.

Fascinating runner for the man who has won the Arc a record eight times but he has never raced over as far as a mile and a half.

Struggled to justify his big reputation early in the season but an impressive winner of the Grand Prix de Paris. Likely to be played late.

The German Derby winner has been well backed in the belief he is big on stamina and will be suited by the testing ground.

Yet to hit the heights predicted by her trainer but was given a lot to do when second to Tarnawa in the Prix Vermeille.

Dettori, whose six Arc wins is a record, will again have to cope with huge expectation as he tries to get his tactics spot on.

Weaver said: ‘Dettori has produced some spectacular rides in this race but the pressure is on him and I honestly believe it’s the biggest ride of his career.

‘So many will be willing him on to win and it is the last roll of the dice for Enable. He will have to watch everyone else and every other jockey will be watching him. Enable is very versatile so that is in her favour. She is the best in the race and she would have beaten them pretty comfortably on decent ground. But extreme ground can bring about unpredictable results. It was testing last year but they are talking about it being even worse.

‘Waldgeist got a great ride from Pierre-Charles Boudot but he was not under any pressure. He sat out the back and picked up the pieces later. Frankie came back in, threw his tack in the corner, hit the wall and just wanted to go home.

‘I want Enable to win but the bottomless ground is a big question because she is such a beautiful mover. The racing gods have ensured she hasn’t been thrown a straightforward opportunity.’

Dettori had no joy on his five Longchamp rides yesterday. ‘It is very testing, heavy going just like it was last year,’ he said.

Last year Dettori seemed mindful not to give Ghaiyyath too much rope up front before the fancied Godolphin-owned runner faded. 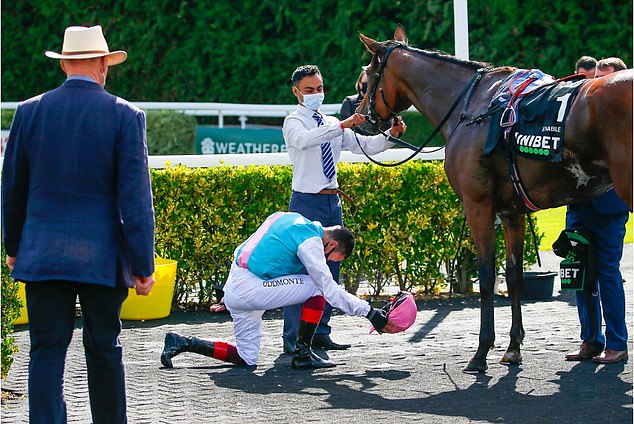 This time the tactical conundrum might be supplied by Aidan O’Brien’s English Derby winner Serpentine.

If he shoots off like he did at Epsom when he established an unassailable lead, how will Dettori react? O’Brien’s 2019 Irish Derby winner Sovereign could also have the accelerator pressed down early. But the role of Waldgeist will probably be played by the other two O’Brien runners, Japan and Mogul. The latter, ridden by Ryan Moore, landed the Grand Prix de Paris over the course and distance last month, quickening up smartly from the rear albeit on better ground.

Back in the spring and early summer, Gosden struggled to get Enable back into racing mode, her body clock ticking more to the beat of a broodmare in her sixth year. He made it clear she was far from being wound up when she returned with a second to Ghaiyyath in the Eclipse Stakes at Sandown in July. 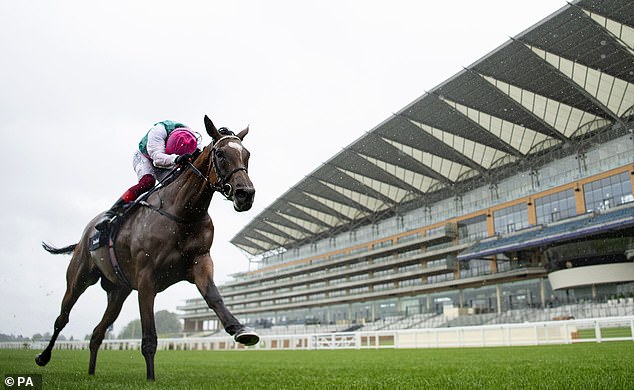 Since then Enable was not hard pressed to beat Sovereign by five-and-a-half lengths in a King George VI & Queen Elizabeth Stakes at Ascot that turned into a three-runner affair and had no more than an exercise gallop to land the September Stakes.

Gosden has gradually brought her to the boil for the one race —which everyone expects to be her last — that owner Khaled Abdullah kept her in training to try to win.

Gosden said: ‘It becomes a tougher challenge every year but she is strong mentally. Don’t tell her she isn’t, she won’t appreciate it! Being indomitable is part of her psyche.’

That indomitability and the mettle of her celebrated jockey are likely to be tested like never before this afternoon. 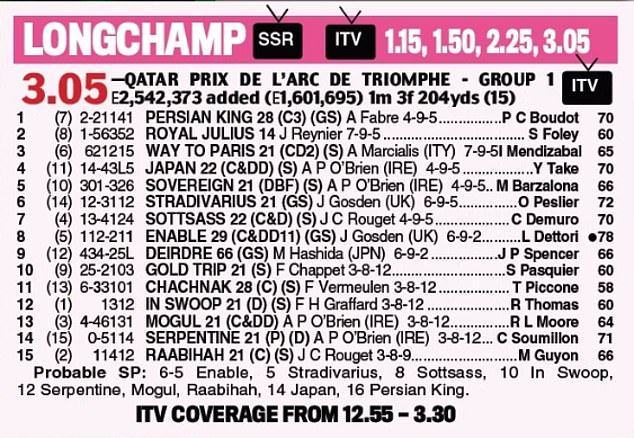