John Leeper booked an emotional challenge for his trainer Ed Dunlop in next month’s Derby when overcoming his inexperience to win the Betway Fairways Stakes at Newmarket.

The William Buick-ridden winner has a special pedigree — his sire is wonder horse Frankel while his dam Snow Fairy won six Group One races for Dunlop, including the 2010 Oaks and Irish Oaks.

But even more significant for Dunlop, owner-breeder Cristina Patino has given her colt the christian names of Ed’s trainer father who won the Derby twice with Shirley Heights (1978) and Erhaab (1994). 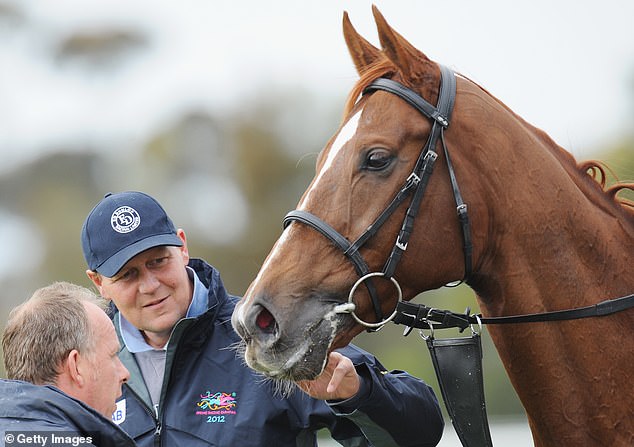 On Saturday, on only his third start, the colt who had opened his winning account on Newcastle’s all-weather track last month pulled far too hard off a slow early pace.

But he still dismissed Tasman Bay, a runner who could also be Derby-bound, by a length and three-quarters, shaping as though the extra two furlongs in the Derby will be made to measure.

Dunlop said: ‘It’s named after my dad so that’s about as much pressure as you can get! William said it was a farce of a race as they trotted for however long. He was a little bit keen and inexperienced but he can only get better with more racing. I’m sure the owner will want to go to Epsom. She has had the dream to do it and as long as he’s OK that’s what we’ll do.

‘He’ll need to step forward again but he deserves to go to Epsom. This is hopefully only the start.’

With Buick in line to ride Charlie Appleby-trained Dante Stakes winner Hurricane Lane in the Derby on June 5, the mount on John Leeper is up for grabs.

Hollie Doyle was on board when he won at Newcastle, while Frankie Dettori, on board Snow Fairy when she won the 2012 Irish Champion Stakes, is also likely to be on the shortlist.