Hopes of a fairytale career ending for Enable and Frankie Dettori sank in the Paris mud as her bid for an historic third win in the Qatar Prix de L’Arc de Triomphe ended with a first unplaced run in her 19-race career.

The cloying Longchamp mud, the legacy of Storm Alex passing through en route to Britain, played its part in derailing the odds-on favourite as she was beaten just over six lengths by Sottsass who held off German Derby winner In Swoop by a neck.

In the 2019 Arc, Sottsass had been behind Enable when they were second and third to Waldgeist. 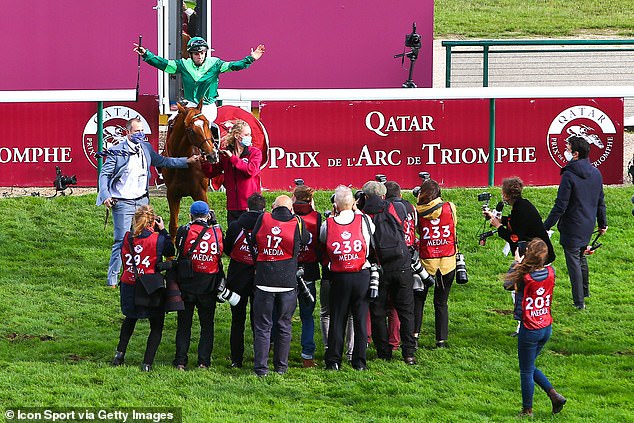 Also a factor, ironically, was the late withdrawal of Aidan O’Brien’s quartet of runners after his stable got caught up in a remarkable situation where the firm which supplies his feed discovered some products were contaminated by a substance unlicensed in Europe but used to help fatten cattle in the US.

The absence of Mogul, Japan, Serpentine and Sovereign clearly weakened the opposition lining up against Enable but the exit of the last two named also stripped the race of early pace-setters.

It meant French champion jockey Pierre-Charles Boudot dictated a dawdle of a race on eventual third Persian King. The winning time was 7.31 seconds slower than the 2019 edition, which had been run on equally atrocious ground, while the winning time of 2 min 39.30 sec was the slowest since Ivanjica won the 1976 Arc.

Dettori had set his heart on a glorious finale for the six-year-old mare he dotes over but, rather than a sense of devastation, he seemed more resigned as he slipped off Enable’s back and gave her a couple of comforting kisses on the neck.

Dettori said: ‘With the O’Brien horses out I wanted to make the running but she struggled from the beginning. The ground was too deep, it kills her action.’

It also did not help that the floundering Enable was the meat in the sandwich between her stablemate and ultimate seventh Stradivarius and Chachnak, who seemed to aim an unsuccessful bite in her direction, after a concertina effect caused by fourth-placed Gold Trip hanging right. 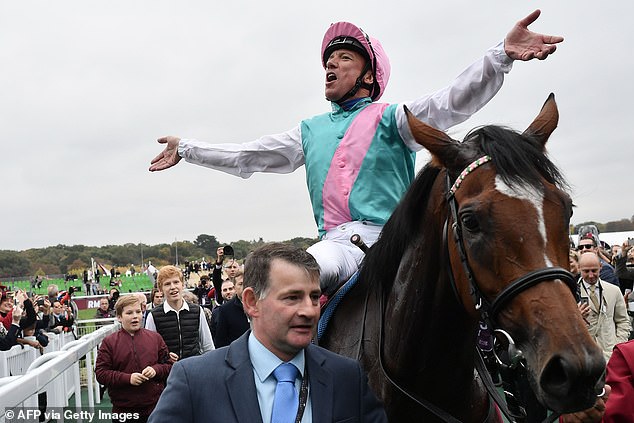 But Dettori reckoned his goose was already cooked.

The 49-year-old jockey, riding in his 32nd Arc and chasing his seventh race win, added: ‘After I couldn’t get to the lead I was happy in my spot in fourth and I had the winner next to me.

‘At the 400m I got a bit of room and I thought I would get her ready steady but before I got knocked over I was already gone. 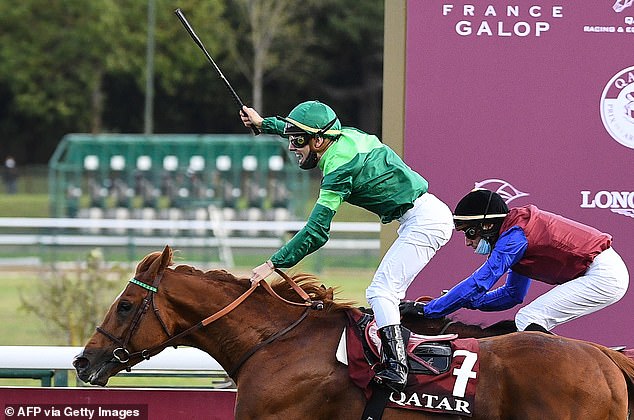 ‘She was second on ground like this last year but she doesn’t like it — it’s as simple as that. She has a beautiful action and she couldn’t do it. It’s sad, we didn’t have the fairytale story.

‘She was tired in the closing stages and I was not going to punish her for no reason. I was calm. I will give her the farewells when we get back to Newmarket.’

Trainer John Gosden, watching at home in Newmarket, said: ‘We knew the Ballydoyle runners were key to the race and would set a solid even gallop and, once they were non-runners, the whole race changed. It was a concern there would be no pace. 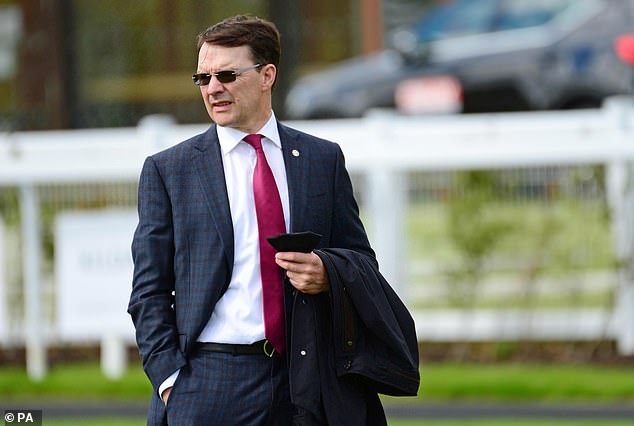 ‘Enable is a mile-and-a-half filly and Stradivarius is an Ascot Gold Cup winner so they would have appreciated a solid pace but it was steady and a sprint in the straight. That’s horse racing. If you can’t take the punches get out of the game.’

Gosden said no decision would be made on Enable’s future by her owner Khaled Abdullah for at least a week but it seems inconceivable that she will race on as a seven-year-old.

Enable had been kept in training to try to solely become the first three-time Arc winner but her extra season allowed her to become the only horse to win the King George VI & Queen Elizabeth Stakes at Ascot three times. 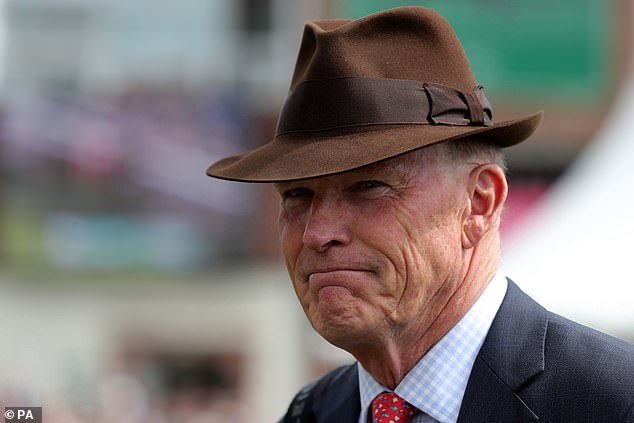 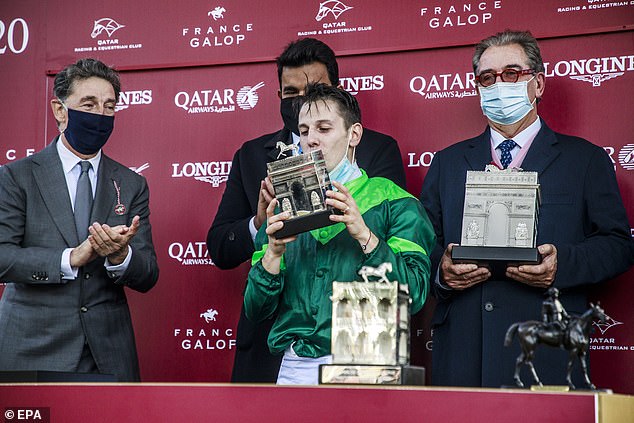 Reflecting on a career that makes her one of the greatest mares to have ever raced, Lord Grimthorpe, racing manager to Abdullah, said: ‘We have no complaints and no excuses. With her, the expectations are always high, exceptional really. She has an extraordinary c.v.’

Sottsass, who trainer Rouget said had only blossomed in the last few weeks, delivered him a first Arc as well as an emotional success for jockey Cristian Demuro, whose father died less than a month ago.

Enable could not make history in the Arc but there was still a landmark moment as Jessica Marcialis became the first French female jockey to land a Group One Flat race with success on Tiger Tanaka in the Prix Marcel Boussac.

The filly, picked up in a claiming race for only €24,000, is trained by Charley Rossi, partner of Marcialis, 30, who conducted part of her post-race press conference with her three-year-old son Leo on her knee.

It was a disappointing day for the British raiders with Clive Cox-trained Nando Parrado second to clear-cut winner Sealiway in the Prix Jean-Luc Lagardere and Kevin Ryan-trained Glass Slippers denied back-to-back wins in the Prix de L’Abbaye when beaten a neck by Wooded.

The only British win of the day was William Haggas-trained One Nation, who won the Prix de Le Foret for the third year running. Dermot Weld struck for Ireland with Tarnawa in the Prix de L’Opera. 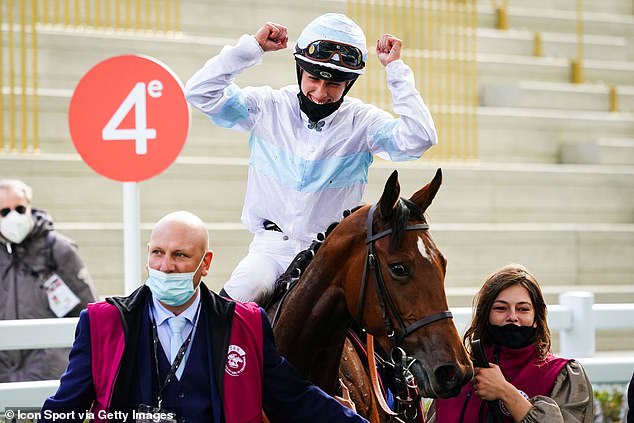