Champion Hurdler Epatante laid down a massive marker for the season and was cut to 6-4 to retain her crown at Cheltenham in March after easing to a four-and-a-quarter length victory in Newcastle’s Fighting Fifth Hurdle.

All the drama occurred at the first two hurdles as Not So Sleepy unseated Paddy Brennan when almost refusing and carried out Silver Streak at the next jump while running loose.

But keeping an eye on his errant jockeyless rival was the biggest worry for jockey Aidan Coleman, who has inherited the Epatante ride from the retired Barry Geraghty.

Oozing confidence, it was just a question of when Coleman hit the accelerator as he swept by in-form, race-fit Sceau Royale after the last hurdle.

Henderson said: ‘It shows there was no fluke about everything she did last season. She was great. She’s a proper hurdler: quick, fast and slick. She’ll go to the Christmas Hurdle [at Kempton on Boxing Day] almost certainly.’

Two of Henderson’s Champion Hurdle and Fighting Fifth wins came via Buveur D’Air. He has not run since a freak incident in last season’s Fighting Fifth when a piece of hurdle got impaled in his hoof.

But with Henderson talking positively about his recovery, a fascinating clash of the JP McManus-owned stablemates is brewing.

The positivity at Newbury was delivered by jockey Tom Scudamore with an attacking win from the front in the Ladbrokes Trophy Chase on Jonjo O’Neill-trained bottom weight Cloth Cap. 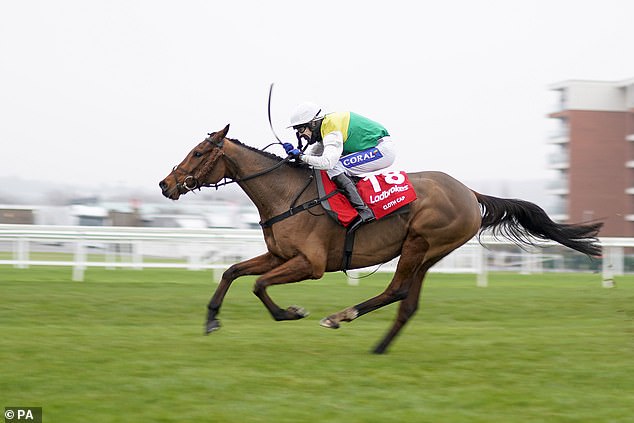 It was a record-equalling third win in the race for Scudamore, and Cloth Cap is now 25-1 for the Grand National.

Revitalised Yorkhill is a 50-1 Grand National hope after winning Newcastle’s Rehearsal Chase at odds of 66-1.

The horse is now trained in Scotland by Sandy Thomson and part-owned by golfer Lee Westwood.