Frankie Dettori has expressed disappointment that racing fans will not get a chance to see Enable in the flesh when she makes what is expected to be her final run in Britain in the Unibet September Stakes at Kempton on Saturday.

Enable’s appearance in the Group Three contest is a stepping stone to a swansong performance when she attempts to land an historic third Prix de L’Arc de Triomphe at Longchamp next month, a contest that will also now be run without British race fans after a decision by the French authorities.

Dettori (on Enable) said: ‘It is sad that nobody is going to be there to give Enable a great reception. She deserved a hero’s farewell on her final run at a British track.

‘She has been around racing for four years and has built a big following. It’s not going to be but at least it will be easier for me because I won’t be so emotional and have to cry on national TV!’

Trainer John Gosden opted to swerve last month’s Yorkshire Oaks with Enable, avoiding a clash with Love, who claimed favouritism for the Arc after an impressive win.

The opposition in a race that six-year-old Enable won in 2018 en route to her second Arc win is much less taxing, even though she has to concede weight to her six rivals.

But Dettori said it is still an essential part of her Arc preparation, adding : ‘She is 1-5 and we don’t anticipate any hiccups but it is all part and parcel of the preparation that John has mapped out for her in the build-up to October 4. 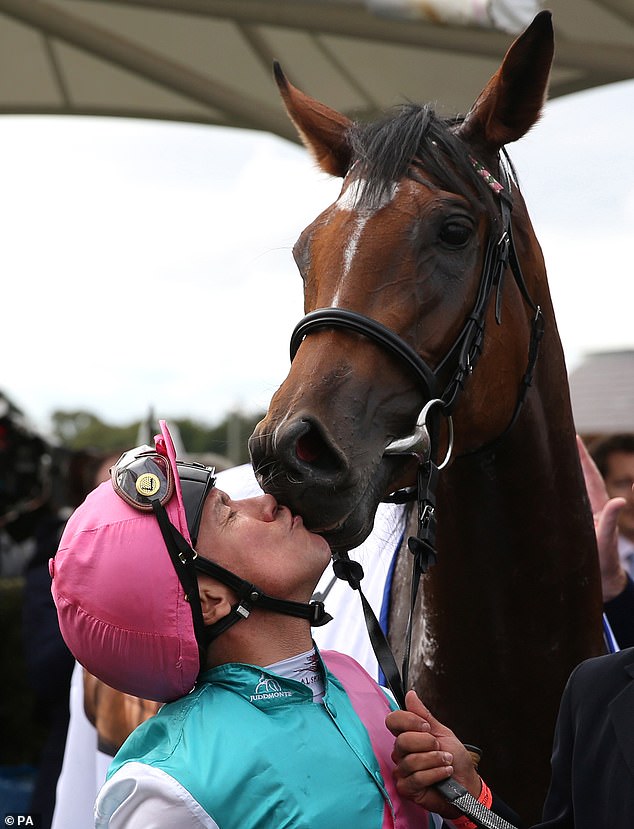 ‘You can do so much at home but nothing can emulate real competition. It’s the whole package.

‘The two-hour journey to Kempton in a horsebox, being in a different stable, hearing the commentaries blast out. It gets the blood up.

‘It’s part of the process for going from 90 per cent to 100 per cent on October 4. That can only be achieved by replicating a race scenario.’

Meanwhile, Enable’s half-brother Derab was a tenderly handled and promising debut second behind Le Barrosa at Ascot on Friday.

The Charlie Appleby-trained winner was ridden by James Doyle, who travels to France tomorrow to take the mount on three-time Group One winner Pinatubo in the Prix Du Moulin, where the opposition includes Irish 2,000 Guineas winner and Sussex Stakes third Siskin.