Frankie Dettori reckons the Pertemps St Leger mount on Aidan O’Brien-trained Irish Derby winner Santiago on Saturday is a ‘great ride to get in an open race’.

Dettori will be trying to win his seventh St Leger and second one for O’Brien having won the 2005 edition for Ireland’s champion trainer on Scorpion.

Dettori said: ‘Santiago is a Classic winner and he stayed two miles when he ran in the Goodwood Cup. He’s a great ride in an open race. I think Willie Muir’s Pyledriver is the biggest danger. He has got class.’

Twelve runners have been declared for the final Classic of the season but Ed Walker-trained English King looks like he will skip the run in the Grand Prix de Paris at Longchamp on Sunday where he will be ridden by Dettori.

Dettori landed last year’s St Leger on John Gosden-trained Logician, who comfortably beat only rival Mythical Magic on his first race since in the Sky Sports Racing Conditions Stakes at Doncaster on Thursday. 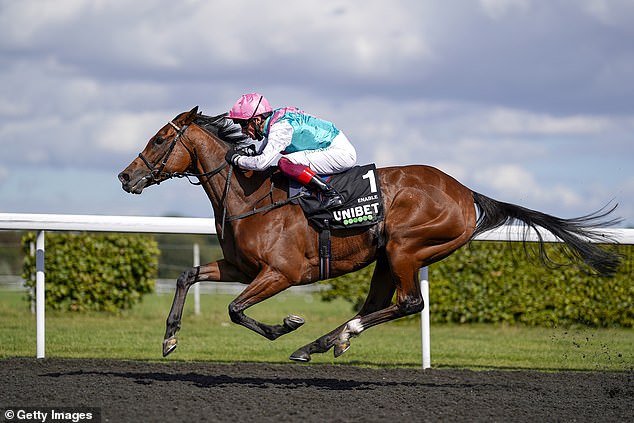 Dettori, pictured at Kempton Park last week, will take part in the race on the horse Santiago

The grey colt was close to death in February after succumbing to the intestinal disease Peritonitis.

Gosden said: ‘You’ve got to remember this horse had two months in intensive care. We’re very pleased to see him back, it’s been a long road.’

Gosden will tread carefully with Logician this season but races like the King George VI & Queen Elizabeth Stakes should be on his agenda in 2021.

Dettori also teamed up with Gosden to win the Group Two May Hill Stakes with Indigo Girl, who should step up to group one level in her next race in either the Fillies’ Mile or the Prix Marcel Boussac.