Frankie Dettori lands big win… and wine! Italian rides impressive Campanelle to victory, and will now self-isolate before next event

Frankie Dettori’s decision to swap York for Deauville paid dividends again on Sunday when he landed the Prix Morny on impressive Campanelle.

Dettori’s sixth win in the group one two-year-old contest on the Wesley Ward-trained filly who had won the Queen Mary Stakes at Royal Ascot followed last weekend’s successes at Deauville on Palace Pier in the Group One Prix Jacques Le Marois and Mishriff in the Group Two Prix Guillaume D’Ornano.

Dettori will have a COVID-19 test on Monday with elite athlete quarantine rules meaning he will have a few days to regain his race-riding legs before partnering dual Arc winner Enable in the September Stakes at Kempton a week on Saturday.

Dettori said: ‘I have had a fantastic week and some great results. I have filled my car with wine, baguettes and cheese, I will travel through the night, get my test tomorrow and then lock myself in the house for a week.’ 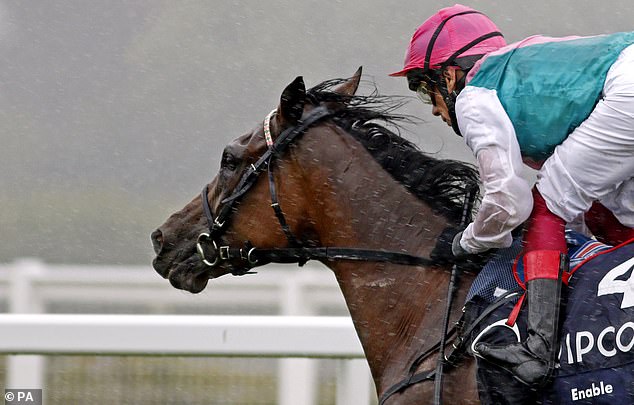 The race did not pan out as planned Queen’s Tactical, who should not be judged too harshly on his was fifth place, beaten just over four lengths.

Ward, who previously won the Morny with No Nay Never and Lady Aurelia, said Campanelle will be given a tentative entry in Newmarket’s Cheveley Park Stakes but her priority target will be the Breeders’ Cup Juvenile Fillies Turf on her home track of Keeneland in November.

Trainer James Fanshawe’s bold decision to pitch Audarya into yesterday’s Group One Prix Jean Romanet was rewarded with a 22-1 win.