Enable smoothly came through her final race before her attempt to win an historic third Prix de L’Arc de Triomphe next month with a bloodless seven-length win in the Unibet September Stakes at Kempton.

Frankie Dettori’s mount missed a beat at the start but was in front after a furlong and sprinted away in the final two furlong in the style expected of a 1-14 favourite.

What is expected to be Enable’s last run in Britain was witnessed by a crowd of staff and owners of around 200 people. But she was enthusiastically applauded back to the winner’s enclosure before Dettori performed a flying dismount and knelt before his favourite horse saying: ‘I kneel for my girl.’

Afterwards Dettori said: ‘We came here to do a job and it was no contest really. We were last the last into the stalls and the rope of the handler smacked her in the face. That’s why she missed the break but these things happen.

‘She had a good work-out in the final two furlongs and had a good blow. It was just what we wanted. All roads lead to Longchamp now and the dream is still alive.’

Enable remains 9-4 second favourite for the Arc on October 4, with Aidan O’Brien-trained Love, winner of this season’s 1,000 Guineas, Oaks and Yorkshire Oaks, the 2-1 favourite. 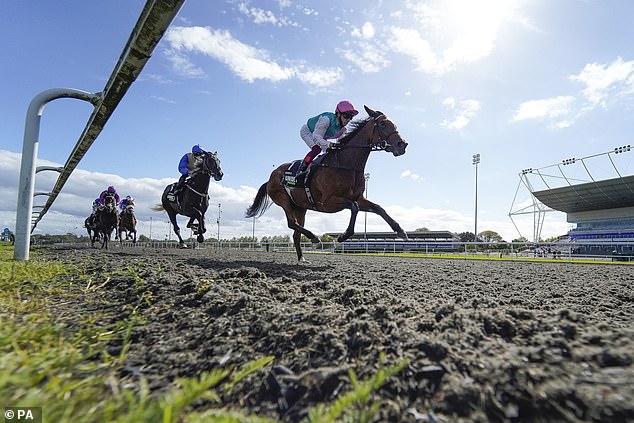 Meanwhile, Enable’s trainer John Gosden said that under current COVID-19 restrictions, which require a 14-day quarantine on return from France, he will not be able to accompany the mare on her Arc challenge.

Champion jockey Oisin Murphy said it was a ‘dream come true’ to ride a group one winner for trainer Sir Michael Stoute as 5-2 favourite Dream of Dreams finished strongly to win the Betfair Sprint Cup at Haydock by a length and a quarter from Hollie Doyle-ridden Glen Shiel. 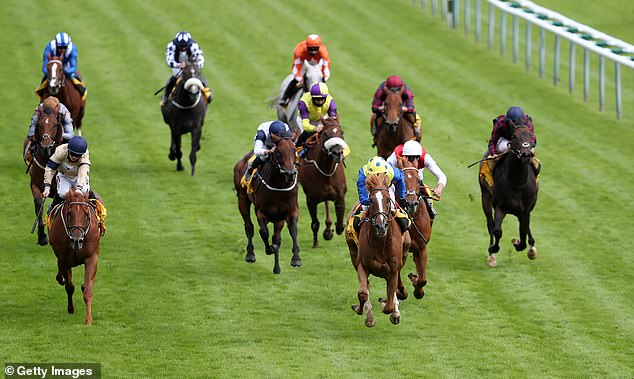 Oisin Murphy said it was a ‘dream come true’ as Dream of Dreams (centre, blue and yellow cap) won the Betfair Sprint Cup

Murphy, who starts a careless riding suspension on Monday which rules him out of Doncaster’s St Leger meeting, said: ‘Haydock has been a happy hunting ground for me. I rode my first group winner here on Hot Streak in 2014 and it is a dream come true to ride a group one winner for Sir Michael.

‘He lost his partner Coral in the last few weeks. I hope the win lifts his spirits and those of the yard.’