Ghaiyyath, whose wins in this season’s Eclipse and International Stakes were among the highlights of the 2020 Flat season, has been retired to stud.

The decision by Ghaiyyath’s Godolphin owners means that the last run for the Charlie Appleby-trained son of Dubawi was his second place to Magical in the Irish Champion Stakes.

The plan had been to run Ghaiyyath in next month’s Breeders’ Cup Turf in the US but that has been scrapped after he appeared to be suffering from a muscle issue after a routine work-out over the weekend.

Appleby said: ‘Ghaiyyath has had a fantastic career, winning nine of his 13 races. His high-class cruising speed and relentless style of galloping was a joy to watch – and as I have said before, this year he came together both physically and mentally and looked the finished article.

‘It is obviously disappointing not to be taking him to the Breeders’ Cup – but the exertions of a long season, which started in Dubai in January, were starting to show, and the decision has been made to retire him.’

The decision to retire the five-year-old comes on the back of Appleby also seeing his other stable star, Pinatubo, retired to stud recently. 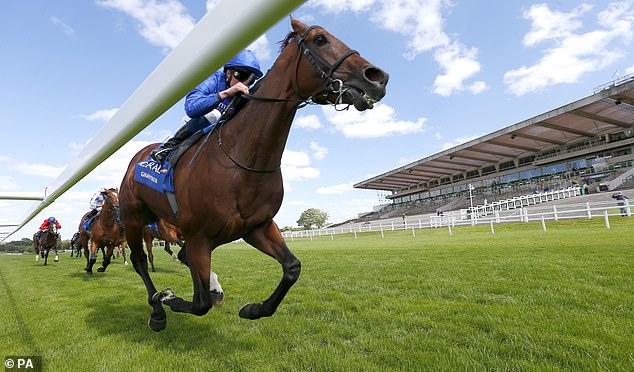 Also retired to stud is Clive Cox-trained Commonwealth Cup winner. He departs the racing stage after sustaining a tendon injury.

Cox said: ‘He suffered a tendon issue that proved to be longer term than first realised, so rather than miss a complete season it was with reluctance that it was decided to retire him to stud. He was the best horse owned so far by HH Sheikh Sultan Al Deen bin Mohammed bin Salman Al Khalifa, who has been deeply involved with all decisions regarding what is best for the horse.

‘We had hoped to finish this season on a high in the Champions Sprint at Ascot last Saturday, but it wasn’t possible. It is a premature close to his racing career. Everyone was looking forward to his four-year-old season.

‘I’ve been fortunate enough to train some top-class sprinters, most recently Harry Angel, but Golden Horde had all the physical attributes to maintain his progress plus a wonderful temperament.

‘We will all miss having him around, and I hope he will be of interest for the next chapter in his life but greatly look forward to handling his progeny.’