At 34, Doyle has had to wait longer than many. He admitted his frustration of usually having to ride the second string for Godolphin trainer Charlie Appleby while his friend William Buick got the pick.

That was the set-up again, with Buick on previously unbeaten 5-4 favourite Native Trail. But while Buick’s mount crossed three-quarters of a length behind in second, the impression Coroebus gave was one of more significant superiority and Buick was the first to congratulate his friend. 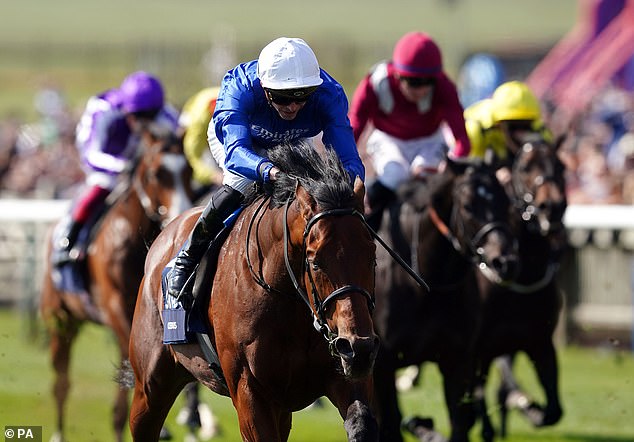 James Doyle landed his first British Classic with Coroebus in the Qipco 2,000 Guineas

Doyle said: ‘I was a bit emotional pulling up. I couldn’t believe the way it had worked out. It has been a tough couple of years. I have had good opportunities but it just hasn’t worked out for whatever reason.

‘You have a few years when you are used to feeling what it is like to win the big races. When you don’t for a little while it does frustrate you a little bit.

‘William is a great friend and he would have known this meant a lot. He took time to come up and say “well done, you deserve that”.’

Doyle’s two previous Classic wins had come in Ireland on John Gosden’s Kingman in the 2014 Irish 2,000 Guineas and William Haggas-trained Sea of Class in the 2018 Irish Oaks.

Both he and Buick were appointed joint first jockeys by Sheik Mohammed’s Godolphin operation in November 2014, replacing Frankie Dettori. 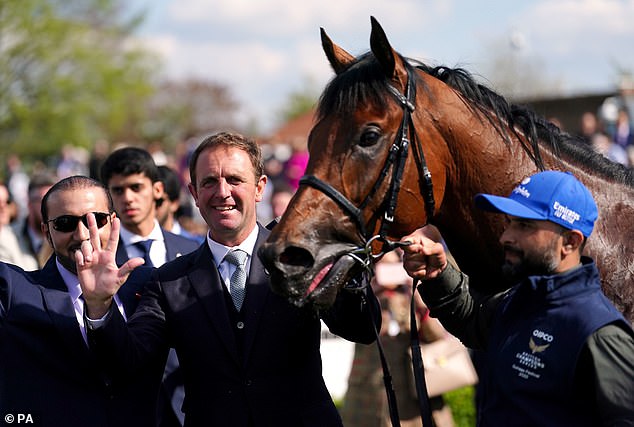 Buick was allocated to the Appleby stable and Doyle to the Godolphin stable operated by Saeed Bin Suroor. But that proved an unhappy marriage and less than two years later Doyle’s relationship with Suroor ended.

Essentially he has had since lived off the scraps from Buick’s table.

Admittedly those have included some tender morsels from the most powerful stable operating in Britain but Doyle’s relief at breaking his Classic duck for Godolphin was evident.

They are now well and truly back punching their weight thanks to Appleby, who was also landing his first 2,000 Guineas win. Not so long ago they seemed incapable of laying a glove on Aidan O’Brien. Appleby now has a clutch of Derby hopefuls which will be racing in trials over the next three weeks.

Epsom is not on the agenda for Coreobus, who will be aimed at the St James’s Palace Stakes at Royal Ascot, and Native Trail, who goes next for the Irish 2,000 Guineas.

O’Brien missed out on an 11th 2,000 Guineas win, Luxembourg’s third place the best of his two runners.