‘We always had it in our minds that this would be Japan’s first big target of the season: Aidan O’Brien’s star primed to wreck Enable’s bid to secure record third King George victory at Ascot

Aidan O’Brien says Enable will have to overcome a Japan in peak condition if she is to land an historic third King George VI and Queen Elizabeth Stakes victory at Ascot on Saturday.

John Gosden has emphasised that Enable’s second place to Ghaiyyath in the Eclipse Stakes at Sandown sharpened her up for this afternoon’s Group One prize.

But O’Brien, who also saddles 2019 Derby winner Anthony Van Dyck and 2019 Irish Derby winner Sovereign in the four-runner contest, says the same applies to his No 1 hope Japan, who was a head behind Enable when third in the Eclipse.

That run followed a below-par comeback when fourth to Lord North in the Prince of Wales’s Stakes at Royal Ascot. Japan was third in last year’s Derby, but always seemed the cream of O’Brien’s colt crop in a disrupted season. He won the Juddmonte International, the Grand Prix de Paris and was fourth in the Arc.

O’Brien said: ‘Everything in Japan’s two runs this year was about going to the King George. He got upset in the stalls and missed the break in the Prince of Wales’s Stakes. The race didn’t suit and he got a little tired.

‘Then he ran a great race in the Eclipse Stakes. We felt he was going to progress big time for it. Everything about his work since has been very good.

‘We always had it in our minds that this would be Japan’s first big target of the season.’ 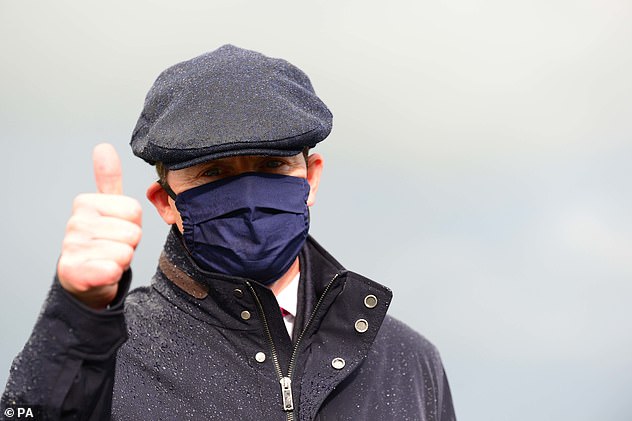 Gosden’s assertion that the competitive fire still burns brightly within Enable was probably backed up by her Eclipse effort.

But he has warned not to expect fireworks from a six-year-old mare who is a more measured performer than the exuberant three-year-old filly who won her first King George in 2017 by a sparkling four-and-a-half lengths from Ulysses.

Her neck success from Crystal Ocean last year was a thriller but one in which she always looked in control, with Frankie Dettori only giving Enable one flick of his whip as he nursed her home.

A third Prix de L’Arc de Triomphe win at Longchamp in October is the big aim but success today would be a major milestone. It would not only elevate her above Swain and Dahlia — the two other dual King George winners — but mean she had won 11 Group One races, one more than Frankel.

Victory would also see Dettori move level with Lester Piggott on seven wins in the race.

O’Brien has run 19 different horses against Enable and never beaten her but now hopes his time has come.

Dismissing chatter that Ballydoyle’s strength in numbers may be a tactical advantage as a ‘load of nonsense’, he added: ‘It will be a great race to watch — Frankie on Enable and Ryan Moore on Japan. It is going to be one of the great matches at a great track. It’s what racing is all about.’