Charlie Deutsch was cheered back to the winner’s enclosure by his fellow jockeys after L’Homme Presse gave him a first Grade One win at Sandown on Saturday, boosting hopes the talented gelding can give the 25-year-old a breakthrough victory at the Cheltenham Festival next month.

It was plain sailing for the Venetia Williams-trained L’Homme Presse as he cruised home by 21 lengths from Mister Coffey in the Scilly Isles Novices’ Chase.

Quietly-spoken Deutsch uncharacteristically allowed himself a Superman-style fist pump as his mount approached the winning line. 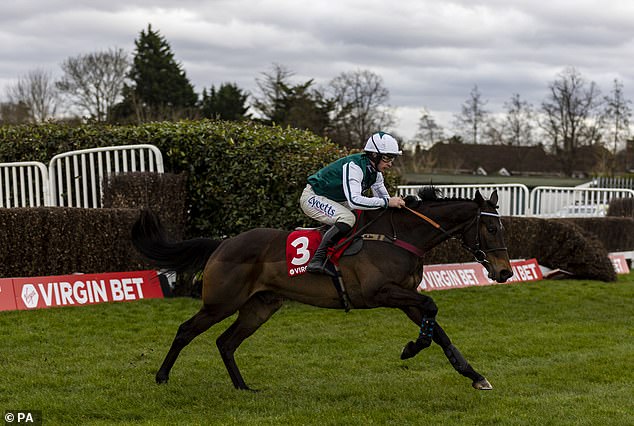 In November, Deutsch won the Ladbrokes Trophy Chase at Newbury on Williams-trained Cloudy Glen but the Scilly Isles success was the pinnacle of the season for a rider who had to rebuild his career after serving two- and-a-half months in prison for dangerous driving while over the drink-drive limit in 2018.

And Deutsch’s godfather Marcus Evans, one of his biggest supporters, was killed in a traffic accident last month.

Deutsch said: ‘This means a huge amount as Grade One wins seemed a long way off. It can sometimes never happen for a jockey. We have a brilliant horse on our hands.

‘I thought I was well clear, so I could give it a Superman. I wouldn’t have done it if I was in a close finish.’

Deutsch said of his late godfather: ‘He would have been here hollering. Hopefully he’s looking down jumping for joy.’

L’Homme Presse has now won all his four chase starts and is 9-2 third favourite for the two-and-a-half mile Turners Novices’ Chase at Cheltenham.

Irish hopes Bob Olinger and Galopin Des Champs, who runs at Leopardstown today, potentially stand in his way but the seven-year-old is growing in stature with every run.