Dr Jerry Hill, chief medical adviser for the BHA, is hopeful that trials of the device — which looks like a hearing aid and is being developed at Imperial College in London — could start as early as next year.

The device, which includes an accelerometer, is able to record the force transmitted to the brain during a fall and the body’s reaction to it.

Development of the Hearables device, which has received funding from the Racing Foundation and is being developed in conjunction with Charing Cross Hospital, allows the body’s vital signs, including heart rate, respiratory rate and brain activity, to be measured.

‘The attraction of the in-ear device is that it tells us what’s happening as close to the brain as you can get apart from drilling a hole in the skull and putting a probe in the brain tissue itself,’ said Hill. ‘If you are wearing it at the time you fall, it will record the force transmitted to the brain and also the body’s reaction to that.

‘It is currently being tested on NHS in-patients who have been admitted with a head injury. The next stage for us is to roll it out to racetracks and that is likely to be in two phases. 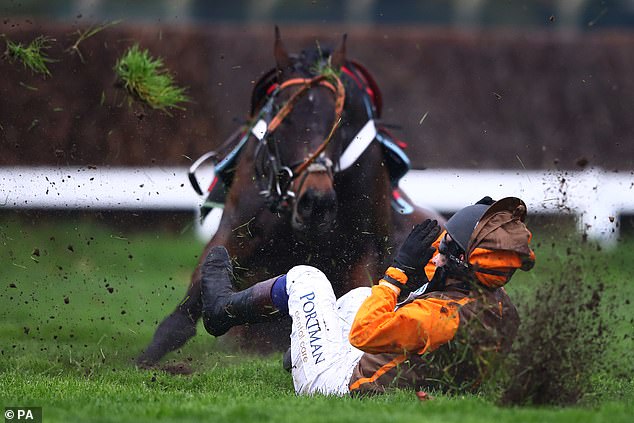 Amateur jockey Waley-Cohen, who is also a dentist, was almost kicked in the face

‘The first will be after the jockey has had a fall. In the medical room, this device will be put in place and will record objective physiological measures in addition to the current concussion screening. The next step is to get jockeys to wear it during racing to measure the impact forces during falls.

‘That is a big jump. You have to have enough devices for every jockey to wear it because you don’t know which jockey will fall and get a concussion.

‘Covid has put the brakes on but hopefully by the middle of next year we would have enough people vaccinated and can head back to business as usual.’

Hill hopes that the Hearables device will provide more objective results for further studies into head injuries and concussion. 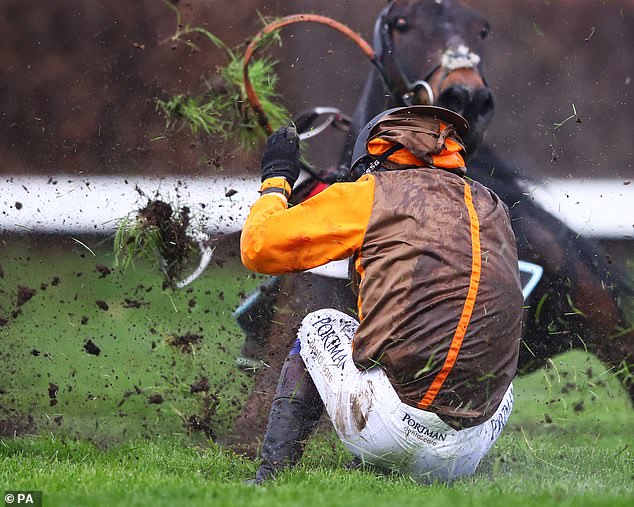 There are longer-term hopes that data from the device could also be used alongside information that could potentially be gleamed from the JockeyCam which is attached to the front of a rider’s helmet.

Work is going on to adapt the device initially developed by Equine Productions for entertainment purposes to measure the impact on helmets during a fall.

‘If we know what the relative movement is of the helmet to the brain can we then design the helmet a bit like the crumple zone on a car. It is there to absorb force. Like a crumple zone, it is useless afterwards but instead of armour plating you want something that is going to absorb force and reduce translation of that energy into brain tissue.’

Sam Fleet, director of Equine Productions, said every jockey who rode in an apprentice race at Bath in September wore the 74 gram JockeyCam. He is hopeful that a wider pilot can be rolled out next year.