Trainer Charlie Appleby hailed Adayar as the best mile and a half horse he has ever trained as the colt powered to an emphatic length and three-quarter victory in the King George VI & Queen Elizabeth Qipco Stakes at Ascot.

Disappointingly for the Godolphin trainer, he had to watch the race from his Newmarket home, another victim of the Covid-19 test and trace pingdemic.

But the trainer who has had to stay away from his stable since Wednesday at least could enjoy the race on his sofa in relative comfort as the William Buick-ridden 9-4 shot became the 14th Derby winner to land the King George in the same season and the first since Galileo, one of the greats of the Turf, in 2001. 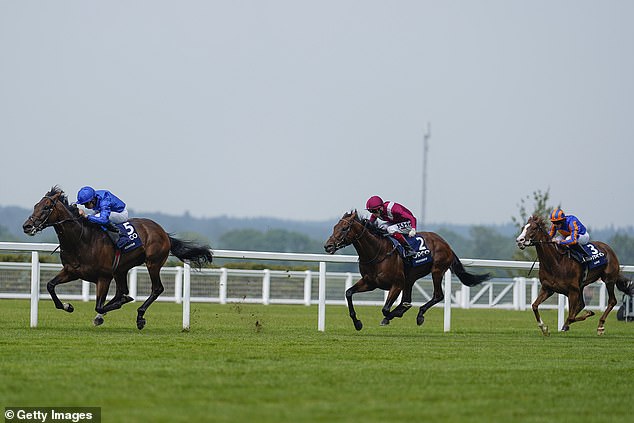 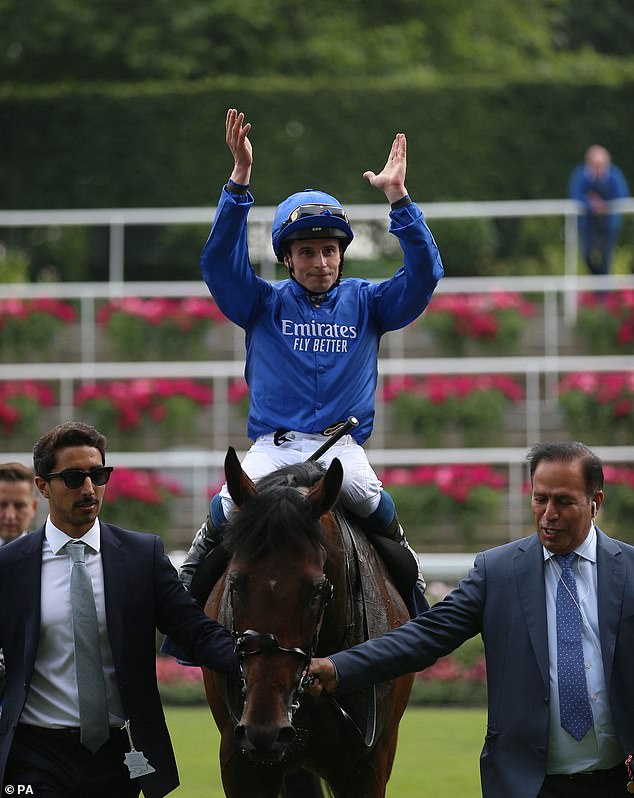 The disappointing performances of some recent Derby winners has meant the default position of many observers has been to treat the Derby form with suspicion until proven otherwise.

The dramatic four and a half length win of Adayar at Epsom had left many wondering whether it was too good to be true.

Now we know Adayar is the real deal after he fought off globetrotting Mishriff with Aidan O’Brien’s five-time group one winner Love, the 13-8 favourite, beaten three and a half lengths in third.

The Prix de L’Arc de Triomphe at Longchamp in October is now in Adayar’s sights – possibly via the Prix Niel at Longchamp – and Coral cut him to 5-1 second favourite behind O’Brien’s English and Irish Oaks winner Snowfall (4-1).

That leaves Appleby’s Irish Derby winner Hurricane Lane to head to the St Leger, the season’s final Classic at Doncaster in September.

Appleby said: ‘Greatness is measured in black and white on what you have achieved and he is by far the best mile and half horse I have trained.

‘You’d love to be there for those historic moments but my job was done and I have a fantastic team around me. It didn’t make a difference whether I was there or not.

‘It was a good Derby, as we already knew – and coming into today, we were confident he was in great form.’

For Buick, it was second King George win 10 years after he won the race on John Gosden’s Nathaniel. 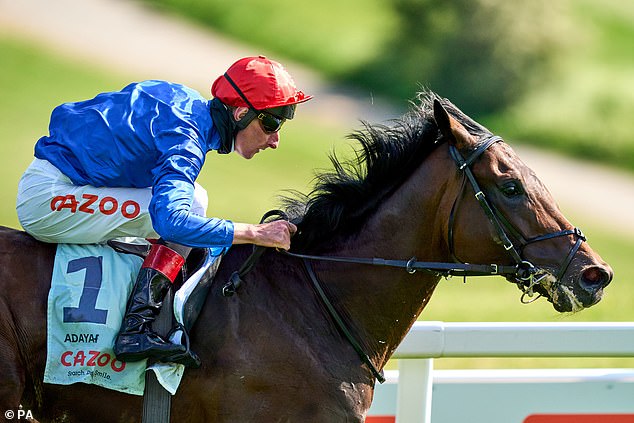 Adayar is ‘by far the best mile and half horse I have trained’, said Charlie Appleby

Appleby had told his jockey to make the most of Adayar’s stamina reserves. The rider carried out his instructions perfectly and punched the air three times in delight as he crossed the finish line.

Buick, 33, said: ‘I may have gone a bit over the top but I really enjoyed it.

‘When Adayar was younger he was not sure how to channel all his power. Now he has learned how to use himself. He is a consummate professional with all the qualities of a top middle distance horse – pace, kick, stamina and the will to win.’

In front of a crowd of almost 16,000 – the biggest at Ascot since Champions Day in 2019, runner-up Mishriff lost nothing in defeat, having got to within half a length of Adayar before being outstayed.

John Gosden’s colt was simply outstayed. He will drop back to his optimum 1m 2f for the International Stakes at York next month.

Love’s run left the O’Brien team locked in a long post mortem after the race.

O’Brien described the contest as a ‘bit of a mess’. His pace-setting Broome missed the break and Love was briefly held in by Mishriff in the straight but it hardly looked like a move that cost Love a chance.

The anticipated rain failed to arrive at Ascot leading to the anticipated withdrawal of David Menuisier-trained soft-ground lover Wonderful Tonight. She could now run in the Lily Langtry Stakes at Goodwood next Saturday.