Lord North produced a stunning performance that will be hard to better all week with a three-and-three-quarter-length win in the Group One Prince Of Wales’s Stakes.

The James Doyle-ridden son of Dubawi made his rivals look like they were operating in slow motion as he powered clear of Addeybb and Barney Roy with Aidan O’Brien-trained 6-4 favourite Japan a labouring fourth.

Back in sixth was the winner’s Frankie Dettori-ridden stable-mate Mehdaayih.

A year ago Lord North was gelded after finishing last in the Heron Stakes and his trainer John Gosden, operating on a phenomenal 30 per cent strike rate since racing restarted, said weaning the 5-1 winner from nature’s most potent substance had been the key to turning around his career.

Gosden said: ‘Lord North was gelded. He needed to be. He was tormenting himself.

‘Testosterone is the most dangerous drug in the world. He just became aggressive at the starting stalls and was becoming a danger to himself, let alone others. He is a lovely horse to be around now.’ 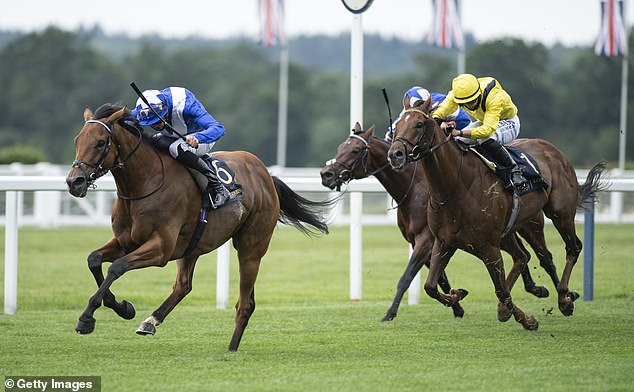 After being gelded, Lord North went on to win the Cambridgeshire Handicap.

Inevitably, Thursday’s win drew analogies with Halling, who won the 1994 Cambridgeshire for the Gosden stable before also graduating from handicaps to become an outstanding 10-furlong performer and dual Eclipse Stakes winner for Saeed Bin Suroor when switched to Sheik Mohammed’s Godolphin team.

Coral gave Lord North 4-1 quotes for the Eclipse Stakes at Sandown on July 5 — but Gosden’s 2019 race winner and dual Arc heroine Enable is pencilled in for that race and he seemed reluctant to commit to a clash of the stablemates. Lord North had won the Brigadier Gerard Stakes at Haydock on his seasonal debut 10 days earlier and Gosden, who attempts to win the Gold Cup on Thursday afternoon for the third time with Stradivarius, added: ‘Let’s just freshen him up and see how we are over the next 10 days and then we’ll make decisions.’

With three wins in the first two days, Gosden has now had 52 winners at the royal meeting.

Colleague Mark Johnston grabbed his 46th victory when William Buick burst out of the pack on Dark Vision on the favoured stand’s side to land the Royal Hunt Cup by a length and a quarter. 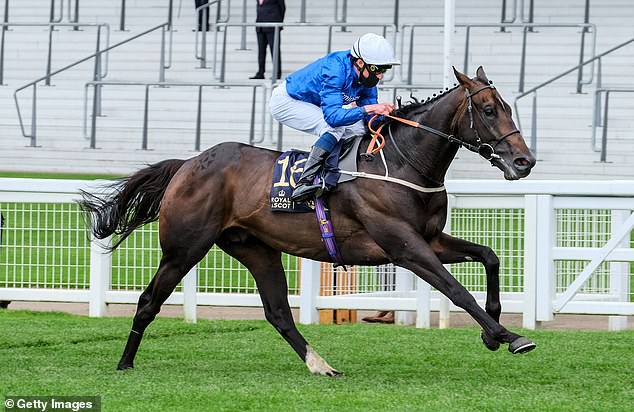 Dark Vision, on the favoured stand’s side, won the Royal Hunt Cup by a length and a quarter

It was Dark Vision’s first win since he created quite an impression winning the Vintage Stakes at Glorious Goodwood in 2018. Subsequently purchased by Sheik Mohammed, he no doubt hoped he was buying a Classic aspirant rather than a colt who 14 runs later would win one of the season’s most competitive handicaps.

Having come into Royal Ascot with six wins, 2016 champion jockey Jim Crowley is well on course to doubling his tally.

Crowley, who is top jockey after the first two days, followed his opening day treble with a win on Hukum in the King George V Stakes. Hukum was a first royal meeting winner for trainer Owen Burrows.

He clearly thinks plenty of the son of Sea The Stars who pulled out plenty when challenged by favourite Kipps but he will probably resist the temptation to run the inexperienced colt in next month’s Derby, especially as he sustained a wound to his right-hind fetlock.

Sir Busker, ridden by champion jockey Oisin Murphy, provided trainer William Knight with his first royal meeting winner in the opening Silver Hunt Cup. The 12-1 shot, who had beaten Dark Vision at Newmarket on June 2, defied top weight to win by three-quarters of a length.