Enable bypassed York’s Ebor meeting but the scale of her task in trying to win an historic third Prix de L’Arc de Triomphe looks a lot more daunting after Love claimed a bloodless victory in the Darley Yorkshire Oaks.

Just 24 hours after Ghaiyyath underlined what a force he could potentially be at Longchamp on October 4 with an emphatic win in the Juddmonte International Stakes, Aidan O’Brien-trained Love conquered all her opponents without breaking sweat.

Coral promoted Love to 5-2 Arc favourite with Enable at 11-4.

The win prompted O’Brien, watching from his Co. Tipperary base, to lavish praise on the daughter of Galileo by saying he couldn’t remember training a filly whose potential was so exciting at this stage of her career.

Love’s win came in a race Enable has won twice, including on her charge to a first Arc as a three-year-old filly in 2017. When the pair meet in Paris, Love will be getting 7lb from her older rival.

The five-length win for the Ryan Moore-ridden 4-9 shot made Love the first filly to complete the 1,000 Guineas, Oaks and Yorkshire Oaks treble since Sir Noel Murless -trained Mysterious in 1973.

While it would be easy to question the value of the form of Thursday’s win, One Voice, who was beaten seven lengths in third, was beaten only a neck by Fancy Blue — an Arc possible herself — in the Group One Nassau Stakes. 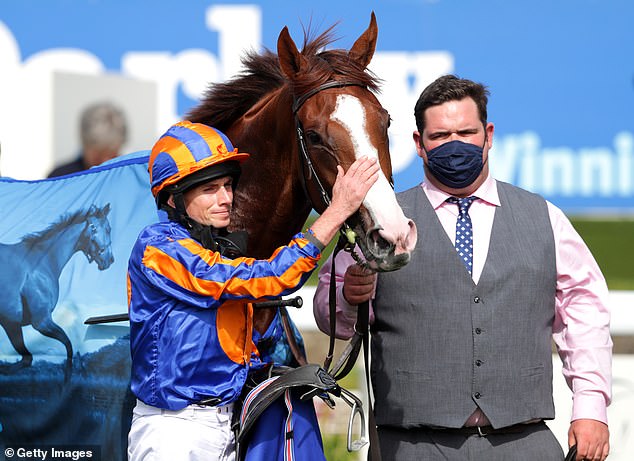 There was concern in the O’Brien camp about how Love would handle the sticky Knavesmire going. But she cruised into the lead three furlongs out and Moore never had to even think about picking up his whip as she eased clear of 33-1 Sir Mark Prescott-trained runner-up Alpinista, who justified the decision to run her a week after winning a Listed race at Salisbury.

O’Brien, whose Derby winner Serpentine will run in the Grand Prix de Paris at Longchamp on September 13 ahead of a possible tilt at the Arc, said: ‘If Love ran well the plan was to go straight to the Arc. She has looked very special from the minute she ran in the Guineas. I can’t name a filly we have had who has been as exciting at this stage.

‘It’s her movement, pace and action and attitude. Those things are the making of great horses and she seem to have all of them.

‘She had a break after Epsom and this was her first run back for the Autumn. You would hope she would progress and she has been doing that.

‘If you look to last year when she got beat it was on slow ground. We were worried going into the race. We had a good discussion and Ryan said that while the ground wasn’t ideal we needed to know what we would do if we got into this situation at the Arc.

‘Now we know we can run in at least good to soft but I would be worried if it was stinking atrocious ground because she has a beautiful low action.’

Enable will have her prep race for the Arc in the September Stakes at Kempton a week on Saturday.

Her trainer John Gosden insisted he was not running scared by missing the Yorkshire Oaks, but it looks a wise decision in hindsight given Enable’s sole reason for being kept in training as a six-year-old is to win a third Arc.

She might not have ended up with a bloody nose at York but she could have endured a heavyweight dust-up that left its mark.