Jessica Harrington unveiled another superstar juvenile on Sunday when Lucky Vega displayed an explosive turn of foot to lift the Keeneland Phoenix Stakes at the Curragh.

Noted travelling strongly throughout the Group 1 feature in the hands of Shane Foley, the speedy son of Lope De Vega quickened markedly at the furlong marker to leave rivals like The Lir Jet in his wake and earn quotes of 16-1 for next year’s 2000 Guineas.

A delighted Harrington said: ‘We thought he was working well, but you never know and everyone said this was a strong renewal.

‘Shane (Foley) said we should be thinking about the Middle Park and I think he’ll get seven furlongs in time as well.’ There was also Group 1 glory in France for trainer Charlie Appleby who witnessed Space Blues lead home a British-trained 1-2 in the Prix Maurice De Gheest.

A smooth winner of the Lennox Stakes at Goodwood, Space Blues produced a smart change of gear for rider William Buick to overhaul the Kevin Ryan-trained Hello Youmzain close home.

L Regal Reality relished the return to a mile to run out an emphatic winner of Salisbury’s Group 3 Sovereign Stakes under Richard Kingscote. 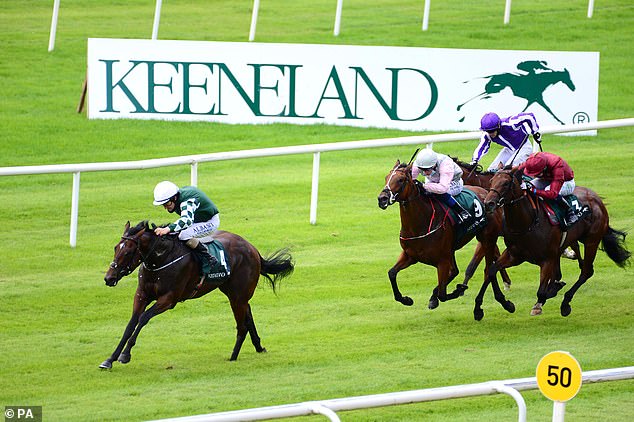