Marcus Tregoning’s warning that Mohaather was ‘on fire’ going into the Qatar Sussex Stakes proved spot-on as the colt burnt off his six rivals.

A nightmare scenario two furlongs out, when the Jim Crowley-ridden miler was stuck behind a wall of horses, turned into a dream result as Mohaather passed five of his opponents in the final furlong to give his trainer a first Group One win since Sir Percy landed the 2006 Derby.

He defeated Circus Maximus by three-quarters of a length with Andrew Balding’s 2,000 Guineas winner Kameko a luckless fourth after finding his path blocked. But Mohaather was a more impressive winner than his victory margin suggests.

A rough race was made even more complicated when Vatican City dropped out quickly after losing a shoe and finishing lame.

Crowley, who described Mohaather’s performance as ‘special’, had to give ground and a heap of momentum on the 3-1 shot before aiming at 9-4 favourite and eventual third Siskin, who looked the likely winner a furlong out.

Mohaather missed last year’s 2,000 Guineas with a stress fracture in his off-foreleg and he endured a luckless run in the Queen Anne Stakes at Royal Ascot last month.

Another unlucky defeat would have been tough to take. Tregoning, 60, said: ‘It was a little bit of a nightmare but I knew if he got out he would have the speed. I thought he’d win. All the indications were we had him right. Luckily it came off but I would have been pretty sore if he hadn’t been able to win.’ 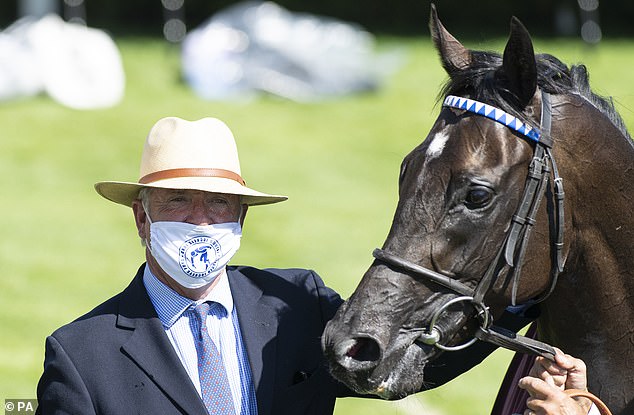 The Mohaather success story is also a family one. Tregoning’s 21-year-old son George and 15-year-old daughter Alice regularly ride Mohaather at his Hampshire stables in Whitsbury, where David Elsworth used to train the great Desert Orchid.

Tregoning moved there seven years ago when he could not balance the books in Lambourn and his string dropped from 100 horses to just 30.

The emergence of Mohaather has coincided with a fresh injection of talent owned by Sheik Hamdan, including Tuesday’s Goodwood winner Alkumait.

Tregoning added: ‘I have had to wait a long time for this but quite honestly we didn’t have the horses. When I left Lambourn it was like starting from the beginning. Luckily, Sheik Hamdan supported me very well.’

Crowley described Mohaather’s win as ‘redemption’ after what had happened in the Queen Anne Stakes. He added: ‘Royal Ascot ate away at me for a few days. I was gutted for Marcus.’

The Prix Jacques Le Marois and Queen Elizabeth II Stakes are obvious targets for Mohaather and possibly the Breeders’ Cup Mile in November. That race could be tailor-made for Irish 2,000 Guineas winner Siskin, according to his trainer Ger Lyons, who said: ‘He is the best three-year-old and he was outstayed by two older horses. There were no excuses.’

Jockey Oisin Murphy was left to rue his bad luck on Kameko. He said: ‘I had lots of horse from three furlongs out if I could have got some room.’