Metier was cut to 8-1 for the Supreme Novices’ Hurdle at the Cheltenham Festival after producing one of the best performances this side of the Irish Sea by a novice this season with a 12-length victory in the Grade One Tolworth Hurdle at Sandown.

The Sean Bowen-ridden 7-4 favourite, extending his unbeaten hurdles record to three, powered up the climb to the finish and was extending his advantage from runner-up Shakem Up’Arry with every stride.

His trainer Harry Fry has enjoyed Grade One success before, notably with staying hurdler Unowhatimeanharry, who is still racing at 12.

Metier, ridden by Sean Bowen, dominated the Tolworth hurdle with a 12-length victory

He trained Rock On Ruby to second in the 2013 Champion Hurdle, having been credited with doing the training as assistant to Paul Nicholls when the horse won the race 12 months earlier.

There was, however, greater significance to Metier’s win as it was the first top-level success for Fry since he began operating from his new purpose-built Dorset base in June.

Fry said: ‘Rarely do races go quite so smoothly at this level. Metier relishes those conditions and is very exciting.

‘He is the highest-rated horse we’ve had off the Flat to go hurdling. Hopefully he can go a long way. Unowhatimeanharry has flown the flag for us for a number of years but it’s great to have another in the yard.’

Fry had never met Metier’s owner, Gary Stevens, before the day he introduced himself in the Owners’ and Trainers’ bar at Cheltenham explaining he had had horses in training in the past with Mark Pitman and wanted to get back into jump racing.

Metier, who cost 150,000 guineas, makes that meeting look fortuitous. Fry, also successful at Sandown with Whitehotchillifili, said: ‘I was in the right place at the right time.’ 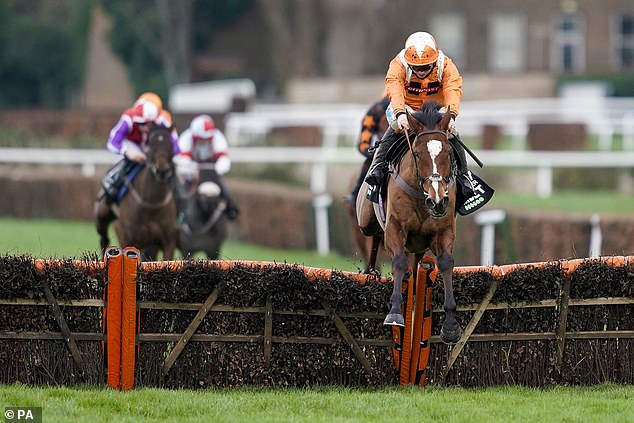 Horses occasionally win after coming out of retirement but the result of Sandown’s Unibet Veterans Handicap Chase was surely unique.

Not only had Seeyouatmidnight been nursed back to fitness by Scottish trainer Sandy Thomson after seemingly career-ending suspensory ligament problems but his jockey, Grand National winner Ryan Mania, also turned his back on the sport in 2014 because of weight issues before returning in 2019. Thomson is gaining a reputation as a rehabilitation king.

Yorkhill, the dual Willie Mullins-trained Cheltenham Festival winner who had lost his way, landed the Rehearsal Chase at Newcastle in November and Thomson is trying to re-ignite the spark in Bellshill, another ex-Mullins chaser, for the Grand National in April. Both are part-owned by golfer Lee Westwood.