When Hayley Turner became only the second female jockey to ride a winner at Royal Ascot last year, it was one of the biggest stories of the meeting.

After repeating her feat on Thursday, the 37-year-old said she hoped it reflected that more frequent opportunities on racing’s biggest stage are now a happy fact of life for women jockeys.

Turner’s win on Onassis was remarkable in its similarity to her 2019 success on Thanks Be.

Both fillies won the Sandringham Stakes at odds of 33-1 for trainer Charlie Fellowes, who felt they would be hindered by disadvantageous draws.

Turner, who put a hand to her ear to pretend to listen to the crowd cheering, said: ‘I thought, it’s not going to be the same but actually I am buzzing just as much as last time.

‘I was just hoping everyone at home was cheering. I could hear my nana shouting! It is still an Ascot winner — still the same race, same grade of horses. It is just as hard to ride winners, whether anyone is here or not.

‘It’s inevitable there are going to be female jockeys riding winners at Royal Ascot and great to see.’

Conceding she was now a mentor for the younger female riders, Turner said: ‘I am the oldest and the nearest to me age-wise is Josephine Gordon who is more than 10 years younger, so maybe I am going to have to accept I am a mentor to the other girls.’ 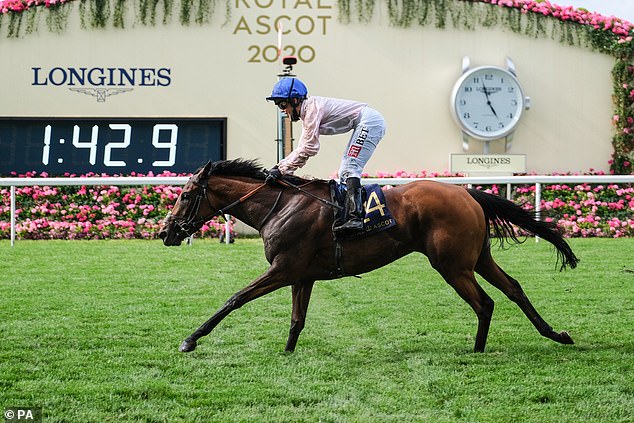 Reflecting on her length-and-a-quarter win from Waliyak, Turner added: ‘Onassis had the perfect profile for the race — the same as Thanks Be last year — and Charlie told me she would win it about three months ago!’ Fellowes said: ‘To win this race two years in a row with the same weight and similarly awful draw is amazing.’

Turner’s win was significant but there is no doubt who is the rider of the meeting so far — 2016 champion jockey Jim Crowley.

To his four wins in the first two days, Crowley added Molatham (Jersey Stakes) and the equally impressive Khaloosy (Britannia Stakes), again in the colours of his boss Sheik Hamdan Al Maktoum.

Crowley, who has now doubled his career royal meeting wins to 12, said: ‘I knew I had a good book of rides but it is so hard to ride winners here, you are happy to get one.’

Trainer Paul Cole and son Oliver cemented their new training partnership when winning the Golden Gates Handicap with Highland Chief. The 20-1 shot was the first winner at the meeting for 19-year-old jockey Rossa Ryan. 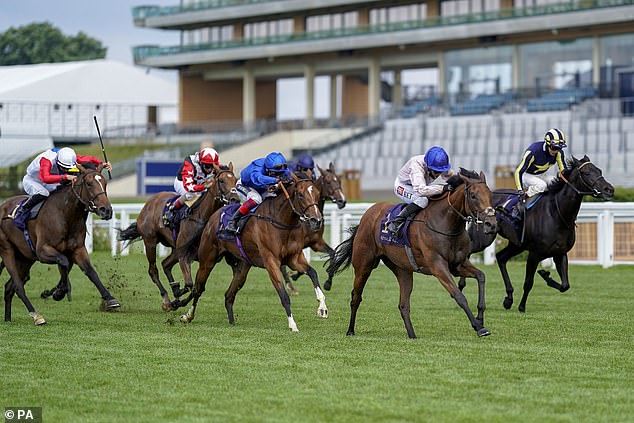