‘We could have done without the rain’: Trainer Nicky Henderson admits the downpour at Sandown will prove tricky for Altior in Betfair Tingle Creek Chase

Nicky Henderson says Altior’s preparation for the Betfair Tingle Creek Chase has gone smoothly but admitted the recent deluge of rain at Sandown has thrown in an unwanted extra obstacle.

Conditions at the track were testing ahead of Altior’s clash with five rivals, headed by 2020 Champion Chase winner Politologue, who is at the top of his game, according to trainer Paul Nicholls.

Altior has beaten Politologue in their three previous meetings but there is extra focus on this afternoon’s clash as Henderson’s 10-time Grade One winner attempts to put a disrupted 2019-20 season behind him.

Henderson said: ‘The preparation has been great and he had a good gallop around Newbury with (Champion Hurdler) Epatante, so he had a good blow. But I could have done without the rain.

‘We are proven against Politologue but Altior is a year older. It will be soft ground and it is his first run of the season, so he will improve a lot for it.’

Altior’s bruising comeback clash last season, when suffering his only defeat in 16 starts over fences at the hands of Cyrname as he moved up to two miles five furlongs at Ascot for the 1965 Chase, knocked both horses for six.

Nico De Boinville’s mount only ran once more — winning the Game Spirit Chase at Newbury in February — but then missed defending his Champion Chase crown with a bone splint problem. 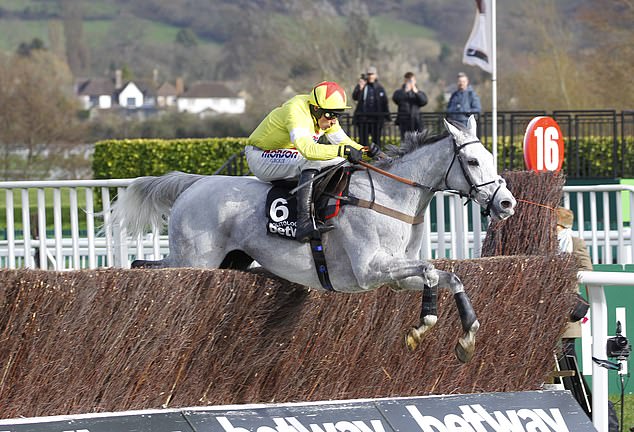 Henderson-trained Altior will come up against rival Politologue (pictured)

Henderson added: ‘In March we were very happy with where we were. It was just a really unfortunate thing to pick up a splint. He doesn’t show any signs of old age. We still haven’t got a horse that can go over five fences with him.’

Altior boasts a five-race unbeaten record at Sandown, including victory in the 2018 Tingle Creek Chase.

Henderson believes even the atmosphere created by a small crowd at Sandown will be a positive for Altior.

There were 1,275 — a mix of owners, annual members and paying spectators — at the track yesterday and it is expected Sandown and Aintree will get close to the 2,000 allowed at sporting venues in Tier 2 areas this afternoon.