The two-time champion had feared his career was over after fracturing his T-6 vertebra in a fall at Newcastle in February and did not make it back until August.

The 40-year-old said: ‘This gave me so much pleasure, it was very special. I was out for six months and I didn’t think I was going to make it back, so I’m delighted.

‘It was a tough time but days like this make it all worthwhile.’

The 27-runner Cambridgeshire is one of the toughest handicaps of the season but the colt trained by Paul and Oliver Cole turned it into a procession, leading half a mile out and winning by four and three-quarter lengths.

Majestic Dawn had finished fifth in last year’s race but had been kept off the track this season by a series of niggles until a run at Kempton earlier this month. 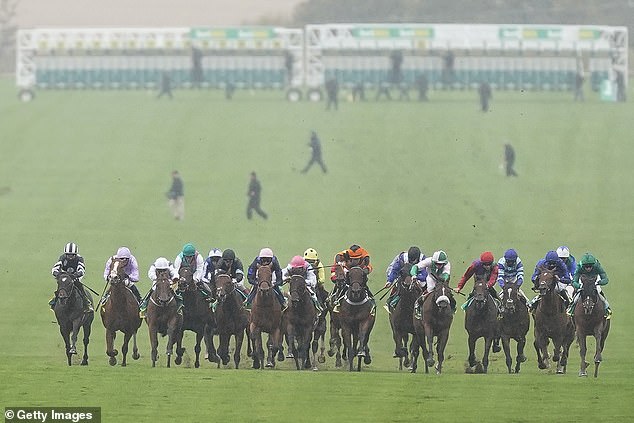 The Group One Middle Park Stakes went to Supremacy, who made all the running under Adam Kirby before holding off Lucky Vega by half a length with Minzaal two-and-a-quarter lengths further back in third.

Trainer Clive Cox said of Supremacy: ‘He’s a speedball and likes to get on with it.’

Cox has strength in depth in his two-year-old team. He landed Friday’s Rockfel Stakes at Newmarket with Isabella Giles, while Nando Parrado, who won the Coventry Stakes at Royal Ascot, will go for either the Group One Prix Jean-Luc Lagardere at Longchamp on Sunday or the Dewhurst Stakes back at Newmarket in a fortnight.

Kameko set to run in Epsom Derby as favourite after race record time in 2,000 Guineas victory

Royal Ascot prize money cut from £8.1m to £3.7m due to staging five-day meeting without fans