Prize money for the Derby plummets to a THIRD of last year’s race – with runners set to share £500,000 pot as racing faces stark economic reality of the coronavirus pandemic

Prize money for the Investec Derby is set to plummet with this season’s race likely to be run for around £500,000, a third of its 2019 value.

When Aidan O’Brien-trained Anthony Van Dyck landed Britain’s most prestigious Flat race last June, the colt scooped a first prize of £921,538 with the historic race worth a total of £1,623,900.

The massive drop reflects the stark economic reality facing racing as well as the wider sporting and business world in the face of the financial earthquake caused by the COVID-19 crisis.

The Derby should have been run on June 6. It is now hoped to run the Classic at Epsom on July 4 behind closed doors.

That will mean a race which can attract an estimated 100,000 spectators will lose all its ticket and hospitality income on traditionally one of the most glamourous days of the sporting calendar with the Queen in attendance.

A spokesman for the Jockey Club said they were not prepared to speculate on what the Derby prize money will be. 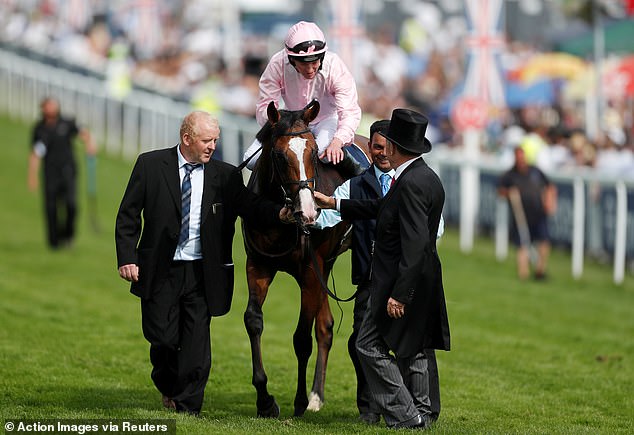 Racecourses across the country are facing the same evaporation of income. With some sponsors expected to struggle to fulfil their commitments, the dramatic fall in the Derby prize money is set to be mirrored across the sport.

While the country’s betting shops remain closed media rights income which contributes an estimated £150m to the sport a year with each shop paying £30,000 is lost to racecourses.

The sport will receive income from the Levy Board with bookmakers paying 10 per cent of their profits from online betting.

Sources have told Sportsmail that some of the most prestigious group one races of season could be run for a third of their expected value with some facing even more drastic cuts.

A racecourse insider, who said the sport must be prepared to be hit by a sobering reality, added: ‘The wheels have stopped. Some racecourses may be able to make a contribution but there is a chance some racecourses will have a zero executive contribution (to prize money). There is no money coming in.

‘It is a massive concern. There is a perception going round that racecourses will find the money from somewhere but it is not there.

‘Prize money will be decimated. Some sponsors will stay with races but some will want to pull out. A lot of sponsorship is hospitality based.

‘A lot of owners and trainers assume when racing resumes everything will be OK and prize money will start to flow but the only money guaranteed to flow is through the Levy Board.

‘The top end will be hit hardest, like a collision with a 10-ton truck.’

Meanwhile, the Jockey Club has submitted an application to Epsom and Ewell Borough Council to stage the Derby and the Oaks on a Saturday in July and August with July 4 the preferred date.

The application, which will be heard on Tuesday, includes requests to erect fences and close down footpaths across Epsom Downs, a public right of way, so that the Classics could be run as part of a seven-race afternoon card under strict restrictions.

A spokesperson for Epsom said: ‘We are exploring the feasibility and practicality of staging the Investec Derby and Oaks at the racecourse with no crowd present, given their importance to the Thoroughbred racing and breeding industries.

‘This is part of the racing industry’s resumption planning, which will be guided fully by the Government, local authorities and delivery partners.’