Grand National hero Rachael Blackmore believes trainer Henry de Bromhead has ironed out the ‘niggly problems’ that have held back her mount Minella Times this season to give her a genuine shot at winning the race for a second successive year.

The first female jockey to win the iconic marathon steeplechase returns to Aintree on a mount who has failed to complete the course in his two runs since, falling at Punchestown in December and then being pulled up at Leopardstown in February.

He has also taken a huge leap in the weights after his six-and-a-half-length 2021 win and carries top weight of 11st 10lb compared to 10st 3lb 12 months ago. 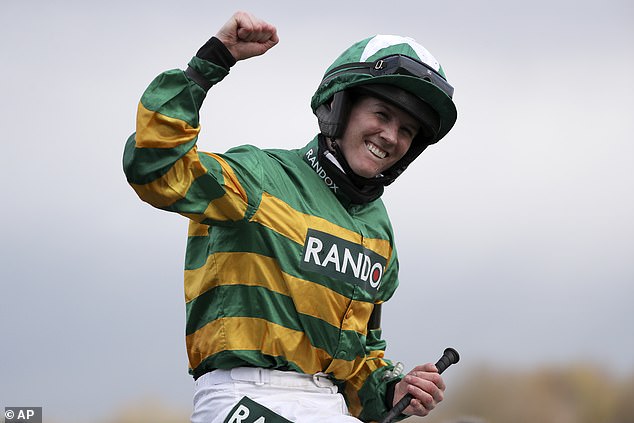 If Blackmore could steer Minella Times to another win in the £1million race, it would be the greatest weight-carrying performance since the great three-time winner Red Rum hauled 12st to success in 1974.

Blackmore, 32, said: ‘His runs this year have been disappointing but he really does seem in great form now and Henry is extremely happy with him.

‘He found a few niggly problems and he’s sorted them out. I worked him two weeks ago and he felt super. He’s one of those horses who just likes Aintree. He really enjoyed it last year and jumped from fence to fence and that has to be a big plus.

‘The weight is the weight and there’s no point me getting too cut up about that. We’ll be going out giving it our best shot.’

The odds may seem stacked against Blackmore winning again but the global recognition she now enjoys on the back of last year’s victory means bookmakers concede Minella Times could leapfrog above the best-backed horse in the lead-up to the race — Snow Leopardess — and start favourite by the time the 40 runners face the starter. 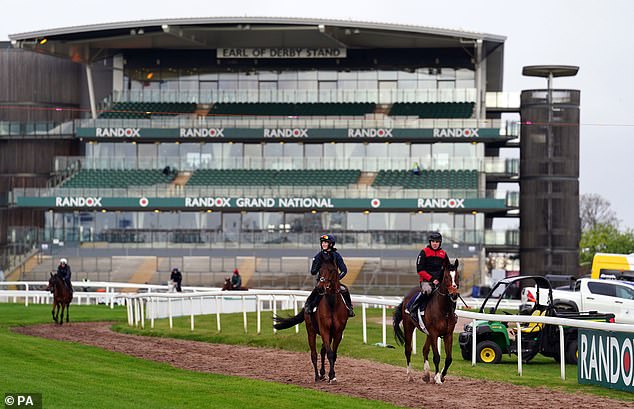 Minella Times, Rachael Blackmore’s horse, is put through its paces at Aintree

Blackmore’s success has been a positive shot in the arm for a sport that can struggle to reach out beyond its own parish.

She came into last year’s race having been the first woman to be crowned top jockey at the Cheltenham Festival and at that meeting last month she broke new ground when becoming the first female jockey to win the Cheltenham Gold Cup on De Bromhead-trained A Plus Tard.

Blackmore is the only female jockey in today’s race but the hope is that her 2021 victory will be inspirational and that in 10 years’ time girls who watched a woman rider smash through a sporting glass ceiling will be challenging for rides and providing a greater equality of gender representation among Grand National jockeys.

For Blackmore, who seems happiest away from the limelight with her family in County Tipperary, winning the Grand National has meant a life transformed.

She said: ‘When you’re growing up, this is the race that captures your imagination and it’s just very special to be able to say that you’ve won it.

‘There’s definitely a massive global reach that the Grand National has and I really felt that after last year. It seems to reach parts of the world that no other races do.

‘When you go into a random clothes shop in Dublin and you’re dressed in normal clothes and someone comes up to you — that is mad.

‘It’s one thing people coming up to you at the races because you’re dressed like a jockey and people can place you, but the odd time you’re in a situation like that is something that didn’t happen 12 months ago.

‘I’ve also had loads of fan mail since last year, from both girls and boys. It’s brilliant and it’s great that it’s sparking an interest in kids and hopefully that helps them.’

Before last year’s race Blackmore made a pact with fellow jockeys Patrick Mullins and Brian Hayes, who is her partner, that if one of them won they would pay for the other two to fly to Las Vegas.

‘They haven’t let me forget, don’t worry,’ she said. ‘They will probably end up booking the flights at the most expensive time to go there!’

Double or quits might be a good idea, Rachael.