Rachael Blackmore has been hailed a ‘sponsor’s dream’ who could cash in as ‘racing’s Ronaldo’ after becoming the first female jockey to win the Grand National at Aintree on Saturday.

Blackmore had already become a star in the minds of the racing public long before her six wins at last month’s Cheltenham Festival, including the Champion Hurdle on Honeysuckle.

But victory in the National, which attracted an 8.8million audience on ITV, could see Blackmore’s earning potential soar and make her winning payday of around £30,000 look like loose change. 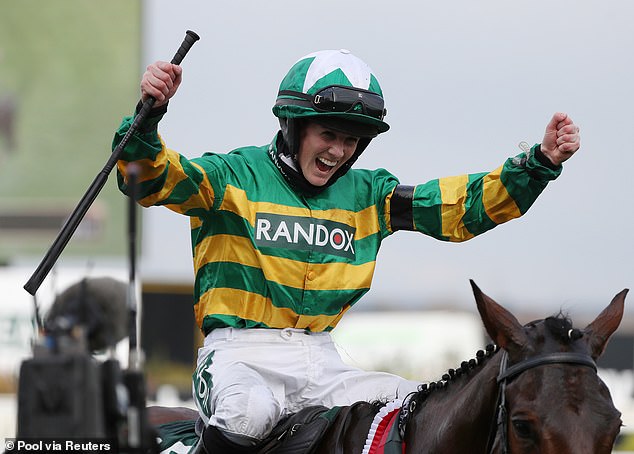 Bill Esdaile, owner of marketing and communications agency Square In The Air, said: ‘Winning the National means Rachael switches from a racing star to a sports star. She is a pin-up for horseracing but also female sport.

‘She is remarkably level-headed and has been handed a huge opportunity while the wind is behind her. She is also the best jockey riding at the moment so she’s the sponsor’s dream because she is the all-round package. Football has Ronaldo, who looks the part and is the part, and Rachael is the same.

‘She will now be attractive for talks, books and films. That’s where the opportunities lie for her.

‘She will have a big career after the saddle. Whether she likes it or not, she has become a female icon.’ 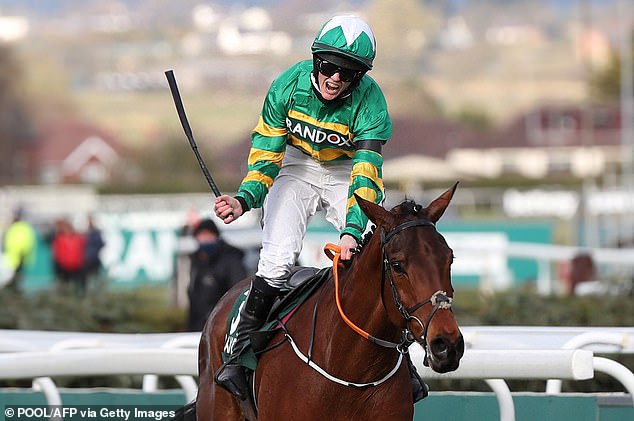 The fact racing is one of the few sports which allows female and male athletes to compete on level terms only serves to elevate Blackmore’s earning potential.

Esdaile added: ‘In an era when the likes of Frankie Dettori are reaching the twilight of their careers, she is a new star.

‘What Rachael did is arguably better than what Frankie did with his Magnificent Seven when he rode seven winners at Ascot.

‘She is smashing down boundaries and doing what no-one has ever done before.’

Meanwhile, Bryony Frost and Harry Cobden were both recuperating at home on Sunday after being released from Aintree University hospital on Saturday evening after being assessed following heavy falls at the course. 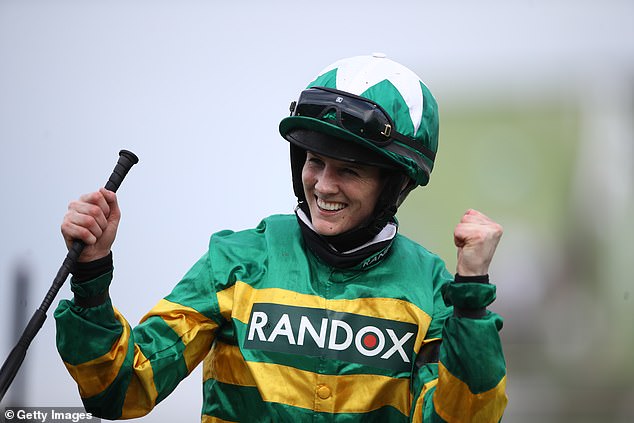 Frost took a blow to her head after being unseated from her mount Yala Enki at the 20th fence in the Grand National, while Cobden missed his National ride on Give Me A Copper after suffering facial injuries in an earlier fall on Lucky One.

Trainer Paul Nicholls provided an update on Twitter, writing: ‘Just seen Bryony. She’s a little stiff and sore but will hopefully be able to ride from the middle of next week and be fit to ride Frodon (at Sandown, April 24).

‘Harry Cobden is up and about and feeling OK and just a little sore. He will give an update in the next few days as to when he can ride again.’

With his two main jockeys sidelined, Nicholls is likely to offer opportunities to Harry Skelton, who is in a battle with reigning champion Brian Hughes for the Jockeys’ Championship.