We should have known it was going to be an Irish winner of the Gold Cup given the green tidal wave that has washed over this corner of the Cotswolds over the last four days.

It was just that not too many thought or hoped the Gold Cup would be won by 9-1 shot Minella Indo, ridden by Jack Kennedy. He beat stablemate A Plus Tard to secure a brilliant 1-2 for Henry de Bromhead, with Willie Mullins-trained dual winner Al Boum Photo a further four and a half lengths back in third.

Certainly Rachael Blackmore, undisputed queen of Cheltenham after being crowned the week’s top jockey with six wins, was hoping it wouldn’t be Minella Indo’s day. Blackmore could have chosen the gelding who gave her a second ever Cheltenham Festival winner when successful in the 2019 Albert Bartlett Novices’ Hurdle. 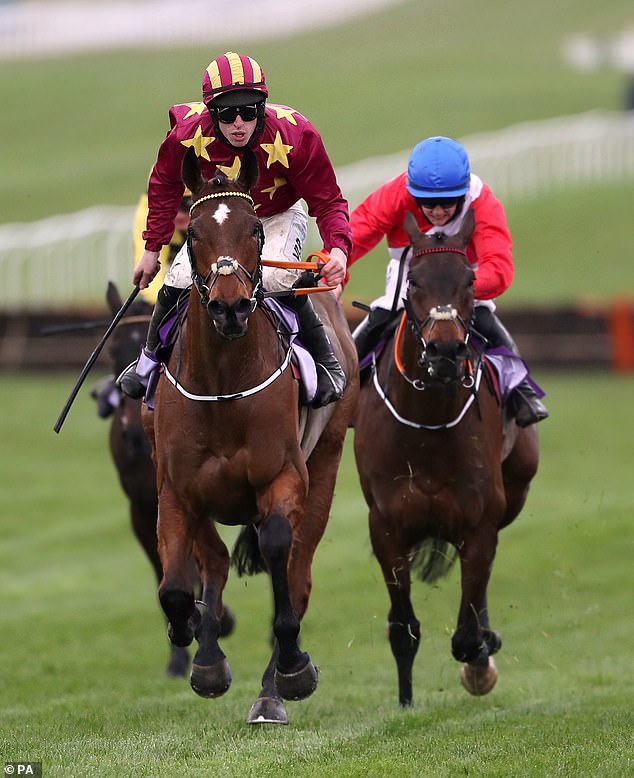 But after Minella Indo had fallen in the Savills Chase at Leopardstown over Christmas and then finished fourth in last month’s Irish Gold Cup, Blackmore not surprisingly nailed her colours to Savills Chase winner A Plus Tard.

Hard as her mount tried — and there were a few strides heading to the home turn when it seemed history could be made — he could never reel in Minella Indo as Blackmore fell a length and a quarter short of becoming the first female jockey to win the most prestigious jumps race of the season.

Despite her amazing week with six wins to earn the leading jockey crown, she was frustrated to have just missed out on gold.

‘I picked the wrong one, that’s all I know,’ she said. ‘I have got my mask on so you can’t see my expression but I can’t complain too much.’ 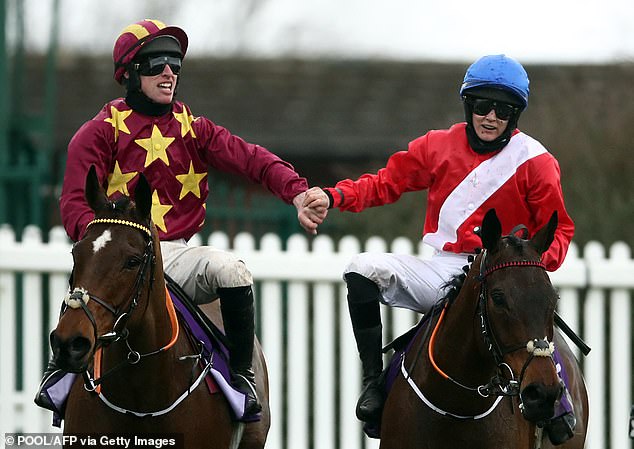 The result was still an incredible Festival landmark with County Waterford-based De Bromhead becoming the first trainer to win the big three championship races — Champion Hurdle (Honeysuckle), Champion Chase (Put The Kettle On) and Gold Cup –— in the same year.

For Kennedy, a 21-year-old who was tipped for the top as a pony racing prodigy, Minella Indo delivered the greatest day of a career which has already seen him establish himself at the top of the tree in Ireland despite breaking a leg four times, one of which ruled him out of last year’s Festival.

‘It’s definitely the best day of my life,’ said Kennedy. ‘This is massive. I can’t believe it’s happening, to be honest, and I was emotional about it after. It means the world to me.

‘I thought I had as good a chance as any horse in the race. I had gone down to school Minella Indo at Henry’s, and a few of the lads in the yard were keen on him, so I was fairly confident. I suppose the fact that Rachael picked A Plus Tard probably took the pressure off, as well.

‘I was left in front very soon but when A Plus Tard came to him he went on again. I suppose turning into the straight I knew it was going to take something fairly good to beat him.

‘I missed last year’s Festival because I broke my leg about two months beforehand, but thankfully I’ve had a year this year that I’ll remember for a long time.’ 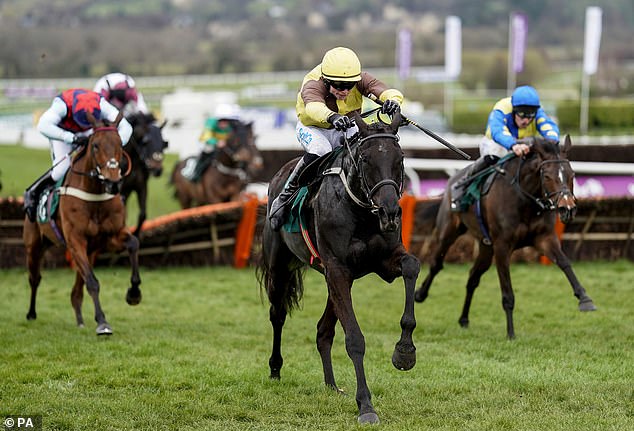 De Bromhead admitted his week which also yielded six wins felt like a dream. The 58-year-old added: ‘I am going to wake up and find myself back in my hotel room on Monday night.’

Asked if he had had any input into which of his two runners stable jockey Blackmore rode, De Bromhead added: ‘She did have the choice of the two. I don’t like to interfere on that. I would hate to put her the wrong way. I leave all that to Rachael. She knew they were both training well.’

In the end, the Gold Cup result reflected the tone of the Festival.

The first British-trained finisher was fourth-placed Native River, the 2018 winner, who was struggling a long way out before being beaten 29 lengths.

Nicky Henderson’s Gold Cup was over by the end of the first circuit. Champ was pulled up before the seventh fence after jumping appallingly while Santini only made it as far the 12th fence.

Al Boum Photo was in contention but could not live with the kick of the De Bromhead duo going to the second last fence.

It left the final lopsided score of 23 wins to five in favour of the Irish. The final day had opened by sticking to the script with a Blackmore winner as she lead two hurdles out and fought off Adagio for a three-and-a-quarter-length success on De Bromhead’s Quilixios in the JCB Triumph Hurdle.

He was one of six winners which would have run in the name of trainer Gordon Elliot but for the emergence of the sickening picture of him sitting on a dead horse, which led to his licence being suspended.

It will have hurt as much as his ban. Yesterday the Irish Horseracing Regulatory Board suspended Elliott’s head lad Simon McGonagle, the person who took the picture, for nine months with seven months suspended.

But that was the ugly side of the Festival. Blackmore and De Bromhead provided the beauty.