The horses are in the parade ring ahead of race three at Wexford but one little girl, who is in her mother’s arms, has no interest in the animals clip-clopping past her.

Her attention — like that of many of those who have attended this charming course on Ireland’s east coast — is centred on the jockey who has emerged from the weighing room, wearing blue silks and a yellow cap to ride Bennystiara, the 22-1 outsider in a field of 10.

‘There’s Rachael, mummy!’ the little girl squeals, pointing with excitement. ‘There! There!’ 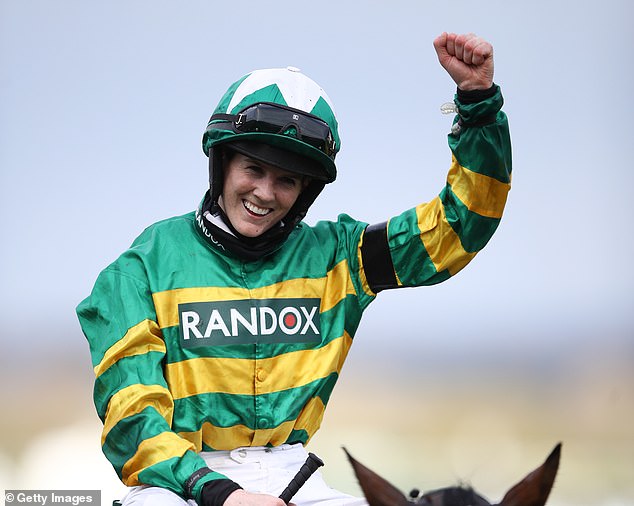 ‘Rachael’ is Rachael Blackmore who, in the space of 14 months, has gone from being viewed as one of the leading figures in her profession to a history-making inspiration; a 32-year-old woman whose feats in the saddle have made her a household name and attracted a new set of fans to horseracing.

Blackmore has plundered many of the biggest prizes at the last two Cheltenham Festivals, including the Gold Cup on A Plus Tard last month and back-to-back running of the Champions Hurdle on star mare Honeysuckle, but to a wider audience she will forever be the first female to win the Grand National.

It is 12 months since she guided Minella Times to a five-length triumph at Aintree that catapulted her on to the front pages.

That success saw her named World Sports Star of the Year at the BBC Sports Personality awards last Christmas and has ensured the phone of her agent Garry Cribbin has been persistently ringing with offers and opportunities from those who want to ride the crest of the wave with her. 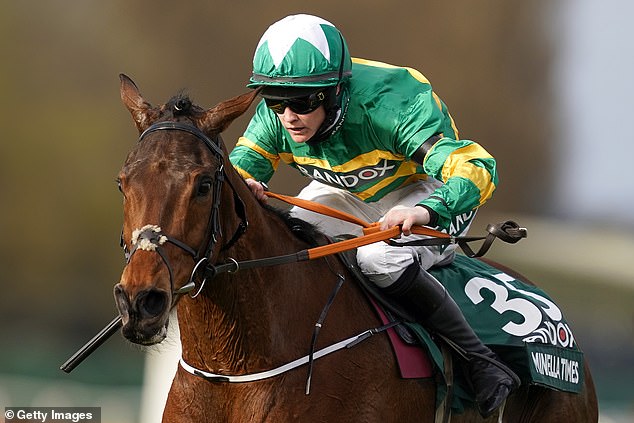 Those close to Blackmore, though, maintain there is no difference in how she was after riding her first winner (Stowaway Pearl, at Thurles, in February 2011) to where she is now. As one man says, ‘those two feet of hers have never left the floor’.

And you can see it here at Wexford. Her first ride of the evening is aboard Merry Moves in the Slaney River Mares Maiden Hurdle. As soon as the tapes go up, Merry Moves finds things happening a bit too quickly and Blackmore has to nudge and cajole her for two circuits.

Her perseverance enables the mare to finish fourth. After dismounting, she gives owner Leonard MacMahon a lengthy debrief. Soon she must go to weigh in but she does not leave without making the night of MacMahon’s eight-year-old daughter, Roisin.

‘We were three hours in the car from County Clare,’ MacMahon tells Sportsmail. ‘It’s the first time she has ridden for me. The trainer’s husband knew her from her days riding for (trainer) Shark Hanlon. He said, “We’ll try for Rachael”. She agreed and, sure, I was delighted.

‘I was meant to be driving here on my own. But I said to Roisin in the morning, “Will you come down?” She said to me, “Why?” I told her we were running Merry Moves and she went, “Nah…” 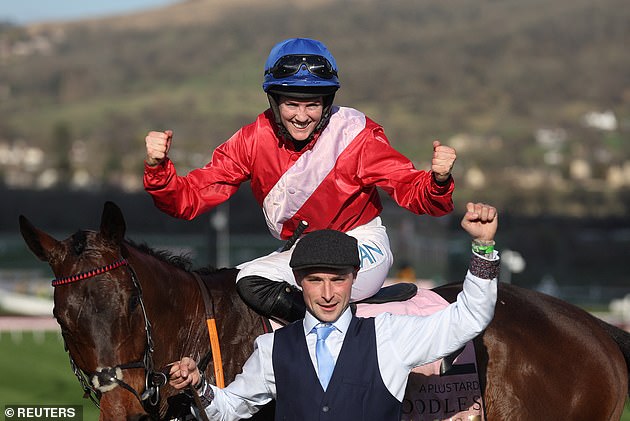 ‘Then I said, “Well, Rachael Blackmore is riding…” And she turned to me and said, “I’m coming Daddy!”

‘She got a picture taken with her — Rachael was so good. We didn’t ask her for anything, she just offered to do it herself.’

The photograph certainly beat the bag of chips Roisin had been promised for the drive back from the races but she was not alone in having her moment. Blackmore had four rides on the card — third place on Kavanaghs Corner was the closest she got to winning — and, after each one, she was greeted by a growing number of fans who wanted selfies or autographs.

Officials at Wexford had predicted such a scenario would play out — and that she would be unfailingly helpful. Her presence at the track ensured more people came through the turnstiles and that has been the case at tracks all over Ireland.

MacMahon says: ‘So many people who wouldn’t be familiar with racing were aware she had won the Grand National and knew the significance of a woman riding the winner of that race. 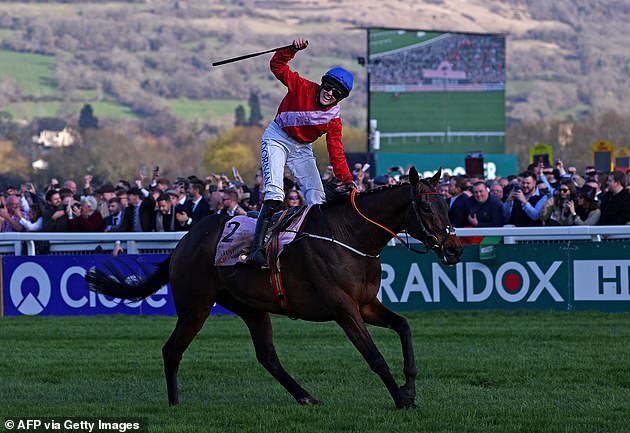 ‘My cousin asked me what my sporting highlight of 2021 was. He’s into soccer, Italian soccer mainly. He’s in his 60s, he wouldn’t be a racing person at all. I said, “I’d have to think about it”. He said, “I wouldn’t. Mine was Rachael Blackmore winning the National”.’

He was not alone in sharing that view. Blackmore will be back with Minella Times on Saturday for another shot at glory; the horse has had a quiet season and hasn’t completed in two runs so far but Aintree is the kind of place that can reignite fires.

The course will be jumping from Thursday onwards. It is the place where aficionados and once-a-year punters meet. They will be united in knowing what Rachael Blackmore’s outstanding feat has done for the image of the race.

‘It was especially good for the Grand National,’ Robbie Power, a former National winner and one of the sport’s most respected riders, tells Sportsmail. ‘It was always, I believe, going to happen — eventually a lady was going to win it, as so many top quality lady riders came through.

‘Katie Walsh and Nina Carberry set the standard. Katie was third (on Seabass in 2012) and when that happened, I think we all realised someday it would happen. There has been so much spotlight on the Grand National and, a lot of the time, people are going there looking for a bad story.

‘So for this to happen, really, it couldn’t have been better. We were in the middle of a pandemic, people wanted some positivity and there it was. I said to her after it that her life was going to change beyond recognition. My life was never the same after I won it on Silver Birch in 2007.

‘I was on TV shows that I never thought I’d be on. I was asked to do different things, it just changes your life. It’s the race that captures people’s imagination, more than any other in the world.’

That is the point. Those who follow the day-to-day business of racing knew that Blackmore had rare ability but showing it so stylishly in front of a global audience had the possibility to open new horizons.

‘She had been leading rider at Cheltenham, she had won the Champion Hurdle,’ adds Power. ‘That’s all fantastic… but the Grand National? That is the one that captures our sport, it is the one everybody watches..’

And they will be watching again this weekend, hoping Rachael can deliver.