Those gathered for the Qipco 2,000 Guineas on the Rowley Mile on April 30 in 2011 experienced an unfolding drama that is seared into their memories.

It wasn’t just the scintillating, front-running performance of Frankel as he pulverised opponents under jockey Tom Queally that made the day so memorable, but the spontaneous round of applause that swept through the Newmarket crowd with two furlongs of the mile contest still to go as those present realised they were witnessing something special.

When the 2,000 Guineas is held at Newmarket next Saturday — the first major sporting event in Britain after Culture Secretary Oliver Dowden confirmed sport can resume behind closed doors from on Monday with a race meeting at Newcastle — the stage will be different. The stands will be deserted, with only key personnel allowed through the gates.

The 2,000 Guineas at Newmarket next Saturday will be first major sporting event in Britain

This will largely be racing back to its roots — a throwback to the 1600s when King Charles II was among the in-crowd following the horses, with the only sounds being the thunder of the thoroughbreds’ hooves on turf accompanied by the shouts and screams of the jockeys.

It may be a world away from the stage Frankel graced but it could still witness something special from Pinatubo. After 11 weeks of shutdown, racing and the whole of sport are in need of a good news story. And this pugnacious colt, who won his six races as a two-year-old, might be capable of delivering it.

He could also start a story that could be the narrative of the racing summer in this most extraordinary year. Pinatubo, a son of Shamardal who carries the colours of Sheik Mohammed’s Godolphin stable, already has a lofty reputation — but one that does not extend beyond the racing village… yet.

His first-season performances included a nine-length romp in the Group One National Stakes at The Curragh, wins at Epsom’s Derby meeting, Glorious Goodwood, Royal Ascot plus Newmarket’s Dewhurst Stakes — the most prestigious two-year-old race of the British season.

That form influenced a team of international handicappers to rate Pinatubo the best European two-year-old for 25 years.

In fact, his two-year-old efforts, the handicappers said, were superior to the level of form achieved by Frankel, whose improvement under the tutelage of legendary trainer Sir Henry Cecil ultimately saw him become the highest rated racehorse of all time in an unbeaten 14-race career. 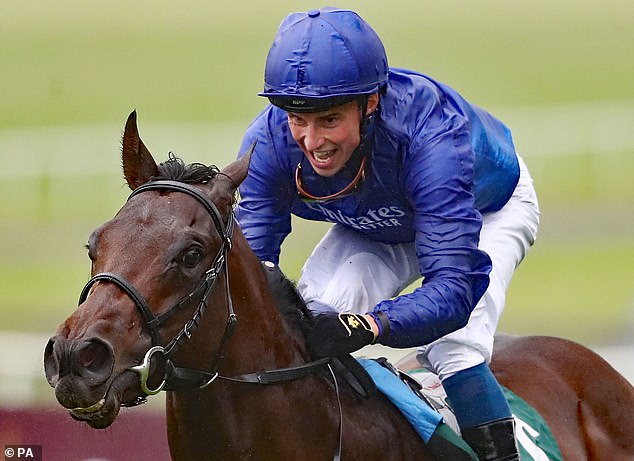 The racing world is full of stars that have crashed and burned but there will many who will be hoping Pinatubo can continue being the real deal — and his trainer Charlie Appleby believes he has the model racehorse.

‘Pinatubo’s main asset is that he is the ultimate professional,’ said Appleby. ‘Any sportsman at the top, you generally do not see them fretting going into a champion competition whatever it is, boxing or golf.

‘Those cool, calm customers are the ones that often turn up with their “A” game and channel their positivity into the swing of the club or the punch of the glove.

‘Pinatubo has a great mind. He turns up and knows that, once those starting gates open, it is game on. He is not a horse who lights you up in the mornings.

‘We went to Wolverhampton [for his debut last year] for that reason. If we thought he was going to be the horse he has turned out to be, we would probably have turned up in a Newmarket maiden.

‘He is a well-balanced colt. He showed his true attributes last season, taking in some of the most challenging tracks in Britain at Epsom, Goodwood and Newmarket — and he has strengthened over the winter.

‘He has met every challenge we have set him so far.’

To match Frankel’s achievements both on and off the track, Pinatubo has a massive act to follow.

But Ed Chamberlin, who will anchor ITV’s coverage of the 2,000 Guineas, says the stage next weekend offers a bigger-than-normal springboard to a colt who could potentially go on to the St James’s Palace Stakes at Royal Ascot or, in an even bolder statement, have a tilt at the Investec Derby at Epsom on July 4. 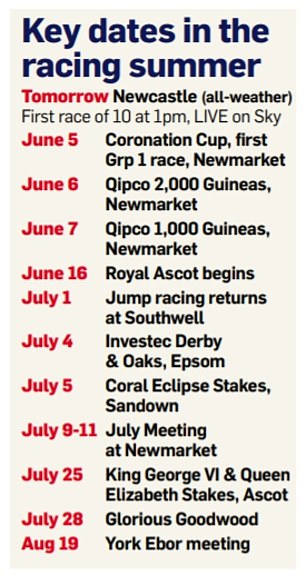 Chamberlin said: ‘On the ITV journey, we have had two horses in Enable, of course with Frankie Dettori, and dual Grand National winner Tiger Roll, which have resonated beyond racing.

‘Despite his brilliance as a two-year-old, Pinatubo is miles off that at the moment. But he has the opportunity to change that largely because the 2,000 Guineas this year will have a larger audience than any recent 2,000 Guineas with people desperate for sport.

‘There will be plenty of new eyes watching the 2,000 Guineas. Our job will be to get Pinatubo into their conscience and sell the thrill of racing with a potential superstar.’ Despite Pinatubo being odds-on favourite for the 2,000 Guineas, bookmakers also see the value of him winning.

Simon Clare of Coral added: ‘The Guineas is an important race. If you get a great performance like we saw from Frankel and Sea The Stars in 2009, it sets up the season.

‘After the false start, we need something special, something explosive and thrilling. Pinatubo is the horse who could deliver it.’