The seven-year-old must shoulder a penalty for last Sunday’s cosy Curragh success, but the excellent Billy Garrity offsets that imposition and the selection looks to be regaining his best form once more.

Considering he was tackling a 22-runner handicap in Ireland, Richard Fahey’s classy speedster was well on top at the line and it was interesting to note rider Colin Keane’s comments post-race which suggested Mr Lupton was coming back to himself.

His odds have tumbled since, but that is understandable given the superiority displayed in victory and it isn’t as though that performance was a flash in the pan as he had previously gone close in the Great St Wilfrid at Ripon.

With the likes of Hey Jonesy, Staxton, Air Raid and Major Jumbo all within hailing distance, there looks a good spread of pace centrally and the close proximity of that quartet should give Garrity something to aim at late on.

Conditions should be ideal for Mr Lupton and his strike rate of four wins from 14 starts in fields of 17 or bigger emphasise how much he relishes the hustle and bustle of a big-field handicap.

Unsurprisingly, there is a host of other interesting contenders.

Having tipped him all season, a win for Arecibo would be a crushing blow, but, with some layers offering as many as six places, I wouldn’t be surprised to see him feature once more given a change of headgear.

Trainer David O’Meara has made a habit of winning this type of event, often with a horse that stays further than six furlongs so stablemates Cold Stare and Young Fire (two wins from four with Shane Gray aboard) also appeal at tidy prices.

Both have run themselves into form this season and should be finishing off their races when some of their rivals have cried enough.

Fivethousandtoone and Rhythm Master both look extremely talented juveniles and have been well touted this season, but I can’t help feeling the double-figure prices on offer for ALKUMAIT (Newbury, nap, 3.25) are insulting.

His course and distance debut featured runner-up Line Of Departure, a winner three times subsequently, plus other winners like Bhubezi and Mujbar were in behind so the form looks strong and the manner of his Goodwood win last time could not have been more emphatic. 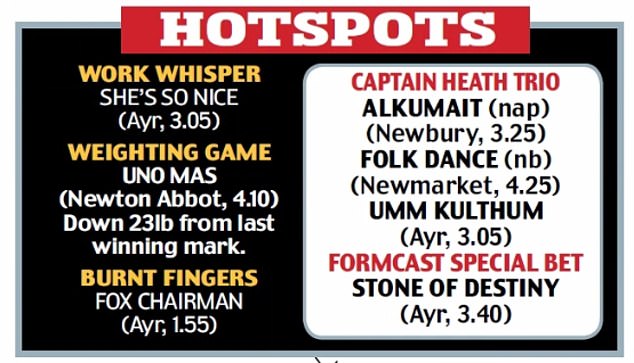