1,000 Guineas runner-up Saffron Beach will step up to a mile and a half in the Cazoo Oaks at Epsom next week

Saffron Beach, runner-up in the 1,000 Guineas, will run in the Cazoo Oaks at Epsom a week on Friday.

The filly, trained by Jane Chapple-Hyam, had the option of sticking to a mile in last Sunday’s Irish 1,000 Guineas or waiting for the Coronation Stakes at Royal Ascot. But she will step up to a mile and a half in the Oaks.

Saffron Beach will be ridden by Adam Kirby, who partnered the filly in a work-out at Epsom on Monday. 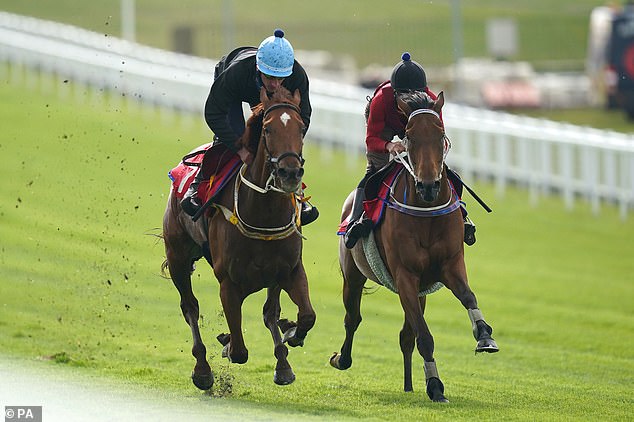 Saffron Beach (L), runner-up in the 1,000 Guineas, will run in Cazoo Oaks at Epsom next week

Chapple-Hyam said: ‘I think she will get the trip, as does Adam. Her exercise rider thinks she will get it and so do her owners. We are all in the same boat.’

Apprentice Saffie Osborne rode out her 7lb claim when successful on Good Earth at Brighton and then completed a double on Big Little Lie. Osborne, who fractured an arm, ribs and punctured a lung in a bad fall at Windsor last season, has already ridden 12 winners this year.

Top Notch, who won 16 of his 33 races, has died at the age of 10. The gelding owned by Simon Munir and Isaac Souede and trained by Nicky Henderson, won the Scilly Isles Novices’ Chase at Sandown in 2017.