The successes of Nube Negra, who beat Altior in the Desert Orchid Chase, and Shan Blue in the Grade One Kauto Star Novices’ Chase in particular underlined that Skelton’s re-focus on quality at his Warwickshire stable is bearing fruit.

Only former boss Paul Nicholls stands above Skelton in the Jump Trainers’ championship race and with a clutch of leading ante-post fancies for the Cheltenham Festival, Skelton heads into 2021 flush with optimism.

The trainer said: ‘When you do what we did at Kempton you mainly feel happy that you haven’t let the horses down because we knew what they were capable of. It’s more that than patting yourself on the back. We have really concentrated on quality and the best thing was the validation that we were right. We knew they were good horses.

‘It is hard to get the team to that level and over the two days we had a live contender in virtually every race.’

The Skelton operation is a family affair. Younger brother Harry does the riding and father Nick, the Olympic Gold medal-winning show-jumper, now coaches promising show-jumping riders from his home 300 yards from Dan’s stable.

By his sixth season training in 2018-19, Dan had joined 15-time champion Martin Pipe as the only jump trainer to top 200 wins in a season. But ambitions have changed. 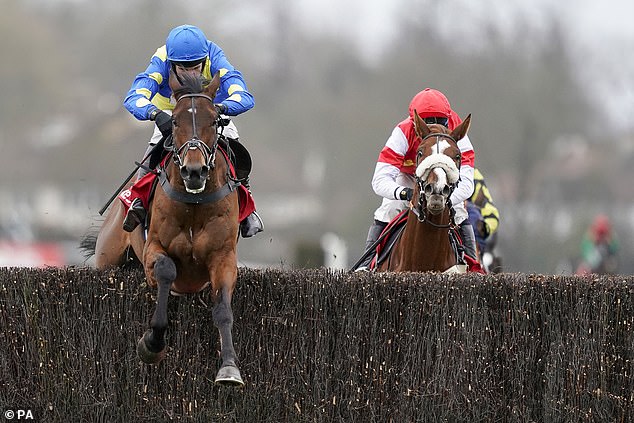 Dan said: ‘We set out this season with a totally different ambition to the one we set out last season with. I felt now was the time to concentrate on quality.

‘When I looked through the list of horses in the summer — when they were starting to come back in — I thought these are a fancy bunch. If we get it right these could be the one to take us to another level.

‘Winning Grade Ones is vitally important. It’s where the owners want to be. It is exhilarating and fun. It’s top-end sport.’

Skelton added: ‘Before, the wheel kept turning. We might have two winners today at Uttoxeter and tomorrow be off to Fontwell and we need three. That grinds on everybody.

‘It’s not that we have less horses but more modest horses might be running eight or 10 times a season because they are bobbing up and down the handicap. With horses like Shan Blue, you might only get five or six.

‘The team are always a happy bunch but they now have slightly more time to spend with their horses and appreciate them. My jockey is also not going to ride six every day and you hope he might last a bit longer as well.

‘I am not saying I am a better trainer now than I was two or three years ago but I think we are better as a team, have more experience and can recognise the horses which are in front of us.’

The victory of Nube Negra was particularly pleasing for Skelton, having recruited the gelding from Spain where he had been running at La Zarzuela racecourse on the outskirts of Madrid.

The seven-year-old gelding, third in the Boodles Fred Winter Novices’ Handicap Hurdle at the 2018 Cheltenham Festival, heads straight to that meeting for the Queen Mother Champion Chase in March.

Skelton, who could run hugely promising Protektorat in the rescheduled Dipper Novices’ Chase at Wincanton on Saturday, said: ‘I never expected him to beat Altior. It is a big deal but Nube Negra won with authority.

‘We got him from Spain and nobody had heard of him or even the racecourses he had run at. We have brought him a long way and I think he is a contender now.’