The 10-1 shot, ridden by Ben Coen, edged out Quickthorn by a head after a protracted battle in the last furlong of the signature race of York’s Ebor meeting.

It was a second win in Europe’s richest handicap for former top jockey Murtagh, who was successful in his rookie 2014 season with Mutual Regard. 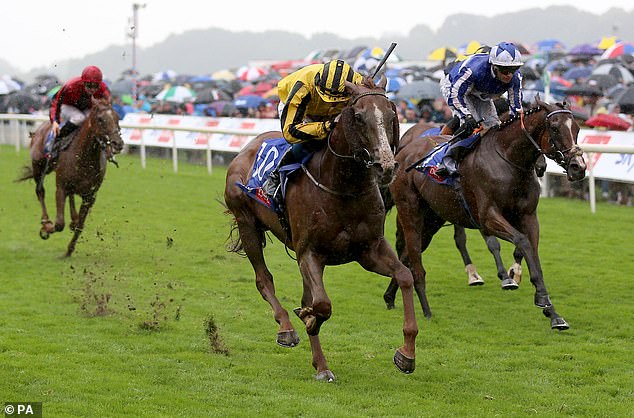 The Queen’s Reach For The Moon is 10-1 second favourite for next season’s Cazoo Derby after an easy four-length win in the Solario Stakes at Sandown, writes Marcus Townend.

The Derby is the only one of the five Classics that the Queen has not won. But if she were to win the most prestigious Flat race it would be an exciting sporting focus in her 2022 Platinum Jubilee year.

After Reach For The Moon had shrugged off Great Max, jockey Frankie Dettori said: ‘He was quite babyish at the beginning of his career. With racing, he is getting better and better. Today he stopped his antics a little bit and he was focusing better. He has got a good size, a wonderful stride and he has got gears. He is a very exciting prospect.’

The closest Her Majesty has come to Derby success was in Coronation year, 1953, when Aureole was runner-up. She landed the Oaks and St Leger with Dunfermline in 1977, the year of her Silver Jubilee.

This season Murtagh secured his first win at Royal Ascot with Sandringham Stakes winner Create Belief and his first Glorious Goodwood scorer with Ottoman Emperor, who is on target for next month’s Cazoo St Leger at Doncaster.

Sonnyboyliston is an entry in the Melbourne Cup in November and had already attracted some bids from buyers Down Under. They may now become too tasty to turn down but Murtagh said his first instinct was to aim Sonnyboyliston at next month’s Group One Irish Leger at the Curragh.

‘He’s a pretty good stayer,’ said Murtagh. ‘He has to improve a lot to get to the Irish Leger but he’s going to get a hike [in the handicap] for that. It’s the next logical step.

‘There have been a few people looking at him for the Melbourne Cup before today. I’m sure they will be on again but they will have to be big offers now.’

Three-time Derby-winning jockey Murtagh also showered praise on 19-year-old Coen. ‘He’s cool, he’s calm, he’s strong and has everything you need to be a good jockey,’ said the trainer. ‘He just needs to get on good horses.’

Valley Forge, trained by Andrew Balding, secured a berth in the 2022 Ebor when he landed the Melrose Stakes under David Probert by half a length from Moshaawer on his handicap debut.

Marco Ghiani is running away with the apprentice jockeys’ title and the 22-year-old, who like Frankie Dettori hails from Sardinia, landed his biggest win yet on Real World in the Group Three Strensall Stakes.

Trainer Saeed bin Suroor, who is aiming fast-improving Real World at the Group One Queen Elizabeth II Stakes at Ascot in October, said: ‘Marco is going to be one of the top jockeys in the future. He tries to copy Frankie but he has a long way to go.’

Another Godolphin horse, the Charlie Appleby-trained Space Blues, won the City Of York Stakes under William Buick and could next be aimed at the Group One Prix de la Foret at Longchamp in October.